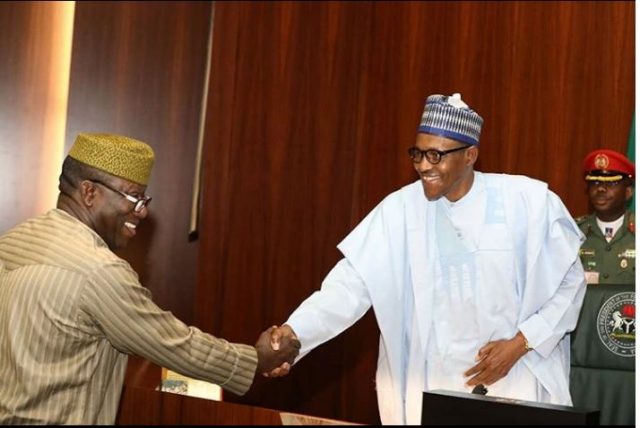 Muhammadu Buhari, the President of Nigeria on Wednesday chaired a valedictory session in honour of former Minister of Mines and Steel Development, Kayode Fayemi.

Fayemi resigned his appointment as Minister last week to enable him contest the July 14 governorship election in Ekiti.

The valedictory session was held before the commencement of the meeting of the Federal Executive Council (FEC).

Buhari lauded the former Minister for his contributions to the successes being recorded by the All Progressives Congress led Federal Government.

He described Fayemi as a man of sound intellect whose contributions helped the Administration achieve progress, especially in the solid minerals sector.

Buhari reiterated his call on State Governments to embark on voter education so that people would get Permanent Voters Card to elect candidates of their choice.

The President, who attributed his victory at the 2015 polls to technology, explained that the introduction of PVCs and card readers had prevented his being rigged out of the 2015 presidential election.

Ministers who spoke during the session commended Fayemi for his outstanding achievements when he served as cabinet minister.

They expressed the belief that Fayemi would emerge winner of the July 14 governorship election in Ekiti and urged him to rescue the state from the “misrule” of the Peoples Democratic Party.

While thanking President Buhari for giving him the opportunity to serve as cabinet Minister, Fayemi expressed appreciation to his colleagues, for their support and love.

Fayemi, who spoke to State House correspondents after the valedictory session, said it was an emotional moment for him to be leaving the federal executive council.

He, however, described his departure from the cabinet as a `win-win situation’ as he was going to rescue Ekiti from the misrule of the PDP.

“It’s an emotional moment for me to be leaving the cabinet, but I believe that it is a win-win situation.

“If I succeed in Ekiti, as I definitely prayed to do, definitely Ekiti will have somebody who is very close to the federal authority and that should translate to more support for our state,’’ he said.