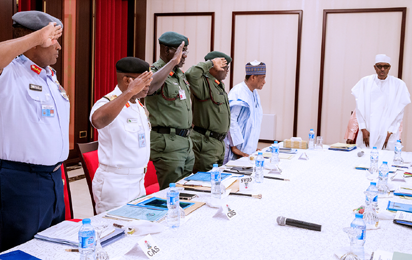 The level of anxiety is high in the Nigerian Armed Forces as indications show that President Muhammadu Buhari may effect changes in the nation’s military leadership any moment soon.
The development, according to Vanguard, would see the exit of the Chief of Defence Staff, Gabriel Olonisakin and the Service Chiefs, the Chief of Army Staff, Tukur Buratai, Chief of Air Staff, Sadique Abubakar and the Chief of Naval Staff, Ibok Ete-Ibas in that order.

It was also gathered that the Chief of Army Staff, may be elevated to a four-star General with new mandate to take over the administration of the military as Chief of Defence Staff, thus succeeding.

While others’ tenure had since expired, Buratai, being a member of Course 29 in the Nigerian Defence Academy, NDA, and junior to the trio, will still be in service given that he has neither reached the retirement age of 56 and/or attained the maximum length of service.

The changes may come in the week, and would also have top officers, among whom are over 150 officers in the rank of Major General in the Army, retired.

Following the expected changes, officers recently elevated to the various ranks in the three arms of the military have not been given new postings even as their current status put them above the positions they are still being made to man.

The recent mass promotion in the nation’s three arms of the military was at the instance of President Buhari, who had given the directive during a meeting he held with the Service Chiefs on Tuesday, October 10, this year.
Sources said during the unexpected meeting, the president had pointedly informed the military chiefs of his action and directed them to dust up their files ahead of in preparation to handing over whenever he carried out the action.