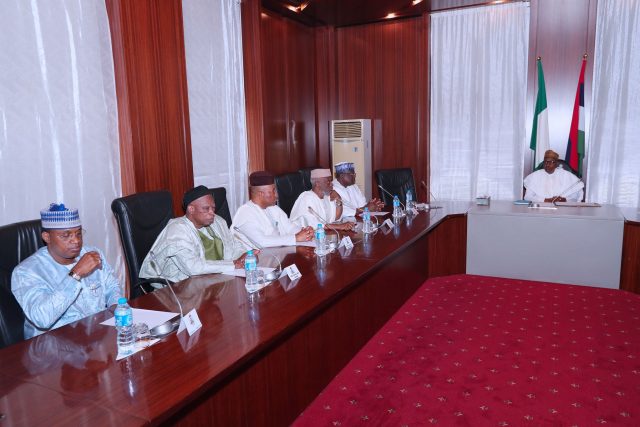 Senate Leader, Ahmad Lawan, says Muhammadu Buhari, the President of Nigeria would soon take appropriate actions aimed at addressing the `not too cordial’ relationship between National Assembly and the Executive arm of government.

Lawan revealed this on Tuesday when he briefed State House correspondents on the outcome of the closed door meeting between the president and the 10-man senate delegation.

He said the President had pledged to address all issues concerning the two arms of government including the impasse between Senate President Bukola Saraki and Inspector-General of Police, Idris Ibrahim.

“Well the IGP thing was one of the issues discussed on a general note But of course it is right that the committee was set up after some incidents had happened.

“But let me said that the issues are beyond IGP/Senate affair. We have so many other issues that bother on ensuring that we work better with the executive arm of government.

“So, the IGP issue was just one of those issues that were discussed.

The Senate leader expressed the hope that the meeting would promote more understanding between the executive and the legislature for the general good of the country.

He described as `normal’ cases of misunderstanding between arms of government, saying that efforts were being put in place to ensure that “the executive and the legislative arms are on the same page.’’

The Senate had on May 9 passed a vote of no confidence on the IGP, describing him as “enemy of democracy’’ over his failure to honour its invitations twice.

Idris, however, asked the Deputy Inspector General of Police (Operations), Joseph Habila to represent him at the senate.

Saraki on Wednesday also accused the IGP of plotting to implicate him and Gov. Abdulfatah Ahmed of Kwara in a murder case involving some suspected cultists.

The Senate on Thursday raised a 10-man panel to meet with Buhari over the allegation leveled against the IGP by Saraki.