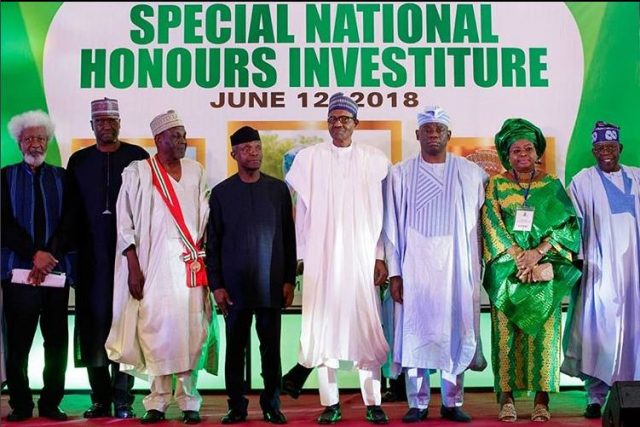 The Senator representing Kaduna Central District, Shehu Sani,said that Muhammadu Buhari, the President of Nigeria has written his name in gold by honouring Abiola, but advised that the honour should not be politicised.

Sani stated this on Tuesday at the 25th anniversary of June 12. 1993, Presidential Election organised by the Oodua People’s Congress (OPC) in Lagos State.

OPC organised the event in collaboration with the Nigeria Union of Journalists (NUJ), Lagos State Council.

Sani was the Chairman of the occasion.

“With the annulment of June 12, we (Nigerians) missed an opportunity for unity, progress and prosperity as a nation,” Sani said.

He said that the greatest honour to Abiola would be upholding democracy ideals, good governance and justice, and ensuring end to poverty, killings and political vendetta.

Qasim Akinreti, Chairman of NUJ, Lagos Council, said: “Today we salute President Buhari for his courage to allow justice on June 12 to prevail. Hope has finally come for Nigerians. We welcome this.’’

“We are subject to godfathers and money in our body politics. We have divisive instruments of ethnicity and religion.

“Ethnicity is an ugly monster that must be killed if Nigeria’s democracy most grow and develop. We have not come together to bury this monster,’’ the don said.

Joe Okei-Odumakin, Coordinator, Women Arise Initiative, said that the best honour to Abiola would be organisation of free and fair elections as well as end to poverty and injustice.

Orji Uzor Kalu, a former Governor of Abia, said that he sent a bill to the state House of Assembly in 2000 to declare June 12 a public holiday because of his belief in it.
Buhari on June 6 announced that June 12 would replace May 29 as Nigeria’s Democracy Day.

The President also announced posthumous award of Grand Commander of the Federal Republic (GCFR) to Abiola, the presumed winner of the June 12, 1993, Presidential Election.

He also announced award of Grand Commander of the Order of Niger to Abiola’s running mate Babagana Kingibe, and the late social critic and human rights campaigner, Chief Gani Fawehinmi.

The beneficiaries received the awards on Tuesday in Abuja.