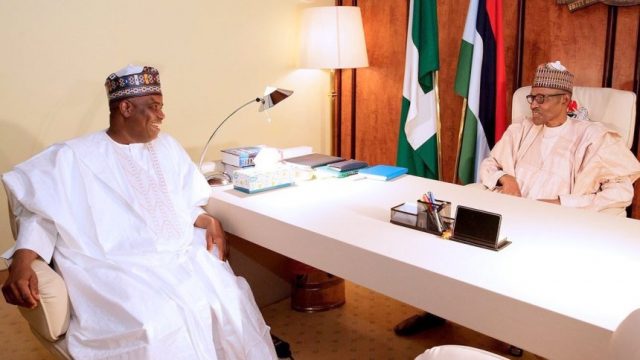 Tambuwal who spoke on behalf of the Nigerian Governors’ Forum, gave the commendation at the presentation of the book: “Making Steady, Sustainable Progress – for Nigeria’s Peace and Prosperity’’, which took place at the Presidential Banquet hall, Abuja.

The book is authored by the Presidential Media Team.

Tambuwal said the President demonstrated that with the directive that the security aides of the Governor Willie Obiano of Anambra be restored.

He said the NGF would collaborate with the publisher of the book, Abdullahi Girei, President/CEO, Euphoria Press Limited, to print more copies of the book for free distribution to Nigerians.

In his contribution, the Minister of Information and Culture, Lai Mohammed, narrated the achievements of the Buhari Administration.

“The essence of this book is to let the world know that despite those who are daily trying to muddle the waters, this Administration has, through fidelity to discipline, determination and transparency, recorded landmark achievements that are putting our country on the path of sustainable growth.

“The achievements contained in the book, many and diversified as they are, are not exhaustive. This book was to have been launched on the 29th of May 2017. That is over five months ago.

“Between then and now, many more achievements have been added to the pile,” he added.

Secretary to the Government of the Federation, Boss Mustapha, said the book was a demonstration of the fact that the change agents of this Administration, have been working.

He said that Nigeria had undergone change including “improved security, fight against corruption, to the extent that even the opposition agrees there is steady improvement of security in the North East.’’

According to him, the publication is not just a book but practicable guides that the Administration has made to redeem the campaign promises.