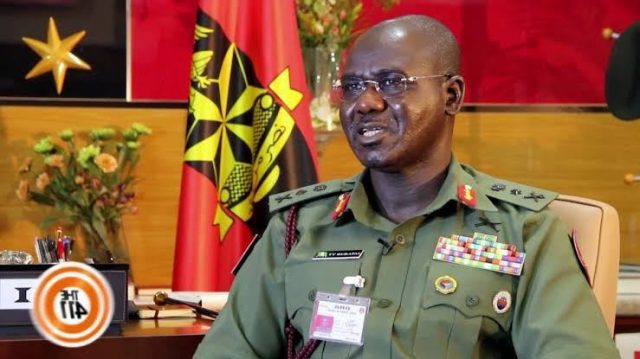 Chief of Army Staff, Lt.-Gen. Tukur Buratai, has appealed  to Nigerians to stop giving undue publicity to terrorists through social media and propaganda.

Col. Sagir Musa, Acting Director, Army Public Relations, in a statement on Friday in Abuja, said that Buratai made the plea at the Headquarters of Operation Lafiya Dole in Maiduguri while visiting troops in the Northeast on Friday.

Buratai said he had noted with great concern the increased propaganda and undue publicity given to the remnants of the erstwhile Boko Haram terrorists group by some people.

He said the development had further boosted the image of the criminal gang thus assuming larger than life status.

According to him, it is wrong for any person to eulogise or support murderers, bandits and armed robbers that the known Boko Haram terrorists group has turned into.

“Consequently, referring to such gang of criminals, bandits, insurgents such as Boko Haram Terrorists Group, JAS or ISWAP in Nigeria could amount to supporting or encouraging terrorism.

“It is also important to note that the mode of operation of these elements, is pure criminality for personal gains.

“It is common knowledge that the criminals no longer pretend to be championing any cause other than quest for materialism as manifested in murder and terror on hapless people.

“Peace loving Nigerians should not be glorifying these criminals by calling them by any name other than criminals, rapists, kidnappers, armed robbers and murderers,” he said.

Buratai lamented that many Nigerians were not aware that giving prominence to criminal activities of terrorist groups through sensational headlines and fake news in both electronic and print media could also amount to tacit support of terrorism which violated the Terrorism Prevention Act 2011.

He said that it was important that all Nigerians should rally round the gallant troops to fight the criminals.

“All should know that the support to the efforts of the Armed Forces of Nigeria in the counter terrorism efforts would boost their morale and it will be highly appreciated.

“The Nigerian army is asking for continued understanding and cooperation of all Nigerians and well meaning people.

“All troops have been enjoined to henceforth go all out to deal decisively with these criminals because they are nothing but bandits and armed robbers.

“Support our military to ensure a secured Nigeria,” Buratai said.