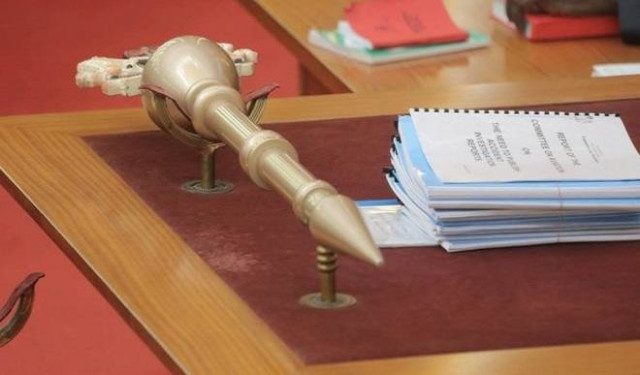 Drama ensued on Thursday at the Gombe State House Assembly during plenary when an All Progressive Congress (APC), member representing Akko west constituency, Abdullahi Abubakar, made away with the mace in an attempt to impeach the Minority Leader.

It was gathered that the Minority Leader, Mohammed Haruna, was reported to have held a press conference on May 5th, soon after the Ward Congress, where he condemned the processes of the Ward Congress of the All Progressives Congress in the State.

It was learnt that following this development, the Peoples Democratic Party, dominated assembly, felt aggrieved with the move by the minority leader and began the process of impeaching him.

Following this development, which split the members equally, it was obvious that the impeachment would not hold.

This led one of the members , Abdullahi Abubakar, to take the mace, at about 1:12 pm.

Abubakar was said to have been assisted by another member, Mohammed Bello, from Gombe South state constituency to escape with the mace.

Bello was reported to have escaped through the door with the mace, while Bello held the door to keep the other members of the assembly from rescuing the mace from him.
The officials of the assembly are yet to address the press as of the time of filing this report.