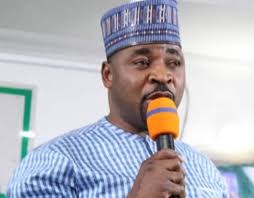 It should be noted that Akeweje is the Chairman of Caretaker Committee of the state National Union of Road Transport Workers (NURTW) set up by the union’s President Tajudeen Baruwa follow the proscription of the union by the Lagos State government.

Speaking through an an open letter to the state governor yesterday, Akeweje said there would be breakdown of law and order today  if the MC Oluomo-led parks management committee refused to vacate the former union secretariat at Abbatoir, Agege.

He also threatened “to mobilise over 5,000 of his members to resort to lawful offensive action needed to take the structure of NURTW in the state which rightfully belongs to it.”

Reacting to the threat, Akinsanya said the state government and security agencies should call Akeweje and his group to order.

He said ‘“using the word ‘forcefully’ is an affront to us in drivers’ union in the state. Instead of resorting to this, why can’t you (Akeweje) back up your claim with a document of proof of ownership or any documentary evidence from NURTW National Headquarters? Instead of resorting to violence, why can’t you approach the law of court for adjudication?”

Police spokesman Benjamin Hundeyin cautioned the Adeshina Akeweje-led group not to engage in any act that would breach the peace in the state.

Hundeyin said the command was capable of quelling any action that could lead to breakdown of law and order.

Offenders, he said, will be arrested and prosecuted.

“We have the capacity to deal with individuals or group that may want to cause crisis in the state,” he said.