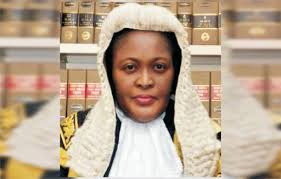 A whistleblower triggered the police raid of Justice Mary Odili’s home in Abuja on Friday, according to latest reports.

According to PM News, the whistleblower identified as Aliyu Umar swore to an affidavit at an Abuja magistrate’s court on 13 October, alleging “illegal activities going on at No. 9, Imo Street, Maitama, Abuja”.

“I have observed some illegal activities going on in those houses within Abuja are illegal and hereby report the said matter to the law enforcement agency.

“I hereby state that all information provided by me to the EFCC is true and correct to the best of my knowledge,” Umar stated in the affidavit.

The Chief Magistrate, Emmanuel Iyanna, subsequently approved the search warrant on October 29, based on another affidavit by a senior police officer, CSP Lawrence Ajodo, seeking a warrant to search the house.

It was unclear why the affidavit meant for the EFCC ended up with an inter-government agency, the Joint Panel Recovery unit of the Federal Ministry of Justice.

The panel comprises the Economic and Financial Crimes Commission, the Nigeria Police Force and the Ministry of Justice.

On its part, the EFCC has denied that its operatives were not involved in the raid of Justice Odili’s home.

The justice reportedly resisted the attempts by the policemen to search her house, insisting that the house belonged to her and not her husband, former Governor Peter Odili.

Peter Odili, who ruled Rivers between 1999 and 2007 was in the crosshairs of the security, when his passport was seized at the Nnamdi Azikiwe Airport.

He challenged the seizure successfully.

Amid the uproar generated by the five-hour raid, the chief magistrate, Emmanuel Iyanna who issued the search warrant revoked the warrant Friday night, accusing the government of misleading the court.

The order read: “Upon misrepresentation to this honourable court that led to the issuance of a search warrant in favour of Joint Panel Recovery, Ministry of Justice, against House 9, Imo Street, Maitama, Abuja, dated October 29, 2021. In view of the above fact, the said search warrant is hereby revoked.”