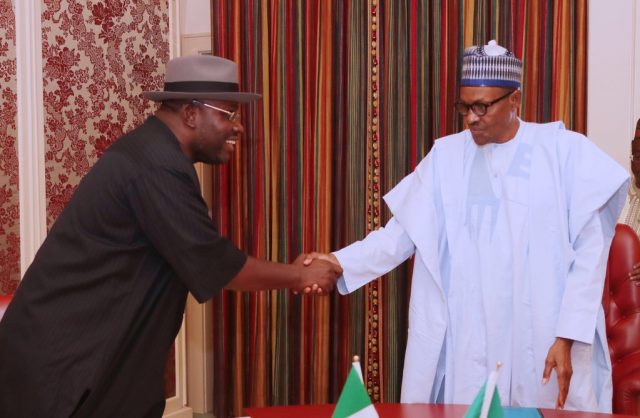 Bayelsa Governor, Seriake Dickson on Thursday updated Muhammadu Buhari, the President of Nigeria on security and socio-economic developments in Bayelsa and the Niger Delta region.

Dickson, who spoke with State House correspondents after closed door meeting with the President, said he stressed the need for change in approach to security management in the Niger Delta during the meeting.

The Governor, who described his interaction with the president as fruitful, said the meeting also deliberated on the issue of devolution of power.

“So, I thank the President for availing me the opportunity to share perspectives on very serious issues on security, stability and development of Bayelsa and the Niger Delta region of Nigeria.

“We talked about a whole range of other issues including what we think should be the final response to the ongoing debate about devolution and I believe that we had a very fruitful interaction,’’ he said.

The Governor reiterated the determination of his administration to continue to partner with the Federal Government and security agencies to advance and consolidate security of life and property in the region.

“Governors of the Niger Delta region are doing a lot and as Governors we will continue to do our best, working with the security agencies, we should be apolitical in supporting constituted authorities in the states.

“We expect that this interaction will yield positive results.’’

Dickson, who stressed that the country was in dire need of devolution, said only devolution or restructuring would guarantee stability in the country.

He noted that the el-Rufai APC panel on restructuring had done a good job.

The Governor, however, stressed the need to expand the scope of consultation, saying that all parts of Nigeria needed to be carried along especially the leadership of Northern Nigeria.