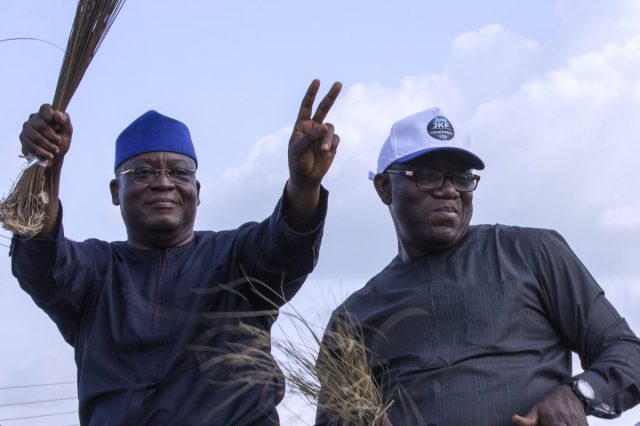 A former Minister of Mines and Steel Development, Kayode Fayemi, on Tuesday, relived Friday’s shooting incident in which he and others escaped death at a rally held at the All Progressives Congress (APC) secretariat in Ado-Ekiti.

The governorship candidate of the APC in the July 14 election spoke at a rally where Dayo Adeyeye, a former Minister of Works, formally joined the party.

He said Governor Rotimi Akeredolu of Ondo State, former federal lawmaker, Opeyemi Bamidele, and Adeyeye would also have been killed but for divine intervention.

“We thank God that we are alive. What do you think would have happened if Governor Akeredolu, Adeyeye, Bamidele and I had died? It was possible for the bullets to have hit and killed all of us, but we thank God. We are grateful that God just prevented it.

“The unprecedented crowd we saw at the welcome reception organised for me and how people were rushing out shows that Ekiti people are determined to fight a liberation war against Governor (Ayo) Fayose,’’ he said.

Fayemi said he remained undaunted by the incident, vowing that the July 14 election would mark the end of the Fayose Administration in the state.

He assured Adeyeye and his followers that they remain respectable leaders of the party who won’t be shortchanged if APC eventually won the poll.

Fayemi said the party would work hard with interest groups across the 177 wards to ensure that PDP was defeated.

He described Adeyeye’s defection from the PDP to APC as a big boost which would help achieve victory.

Fayemi also denied an allegation that he would sack teachers, saying his return would only add value to the lives of civil servants.