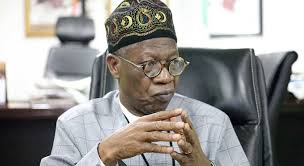 The Human Rights Writers Association of Nigeria, HURIWA has called for the arrest and prosecution of the Minister of Information and Culture, Mr Lai Mohammed for referring to the report by the Lagos State Judicial Panel on Lekki Shooting as  fake news

It will be recalled that the Minister of Information and Culture, Mr Lai Mohammed on Tuesday during a press conference in Abuja, said the panel report was a recycled fake news. Mr Mohammed insisted that there was no massacre at the Lekki Tollgate in October 2020.

He said that the panel only wasted their sitting allowances, stressing that more investigations are needed to uncover the controversy behind the shooting allegation.

He said that only when a well-investigative panel is set up and come out with its findings, the Federal Government would not change its stand.

Reacting to the development, the National Coordinator of HURIWA, Emmanuel Onwubiko in an exclusive chat with DAILY POST said that the Minister must be arrested over his comment.

He said that the country is in a mess, stressing that Nigeria has no Federal Government. He lamented the level of “anarchy” in the President Muhammadu Buhari’s government.

“So let’s just assume that the federal government has spoken through the Minister of Information who at the time the report was submitted to the Lagos state governor was contacted by the media and he told them that he couldn’t speak because he was in a meeting outside Nigeria and we later learnt that they went for a UNESCO meeting somewhere in Paris, France.

“So if he now has enough courage to speak on the report that has not even been published. The report that every Nigerian is seeing now was leaked by some of their members so for now, there is no official disclosure of what the Lagos state panel recommended.

“If the governor set up a judicial panel which ought to be independent, before the panel submits a total report to the person that set it up, what the panel ought to do is to have addressed the public and also read out the executive brief, the summary of what they are going to present to the governor.

“The federal government said they have reported through the minister and what the minister said is the kind of thing you hear from places that are considered to be failed states. Nigeria is like a failed state.

“Lagos State utilized the public funds of Nigeria to set up the panel and the panel sat for one year. The panel hired testimony from different types of people, except the army that appeared a few times and disappeared and never showed up again.

“The panel sat and spent one whole year and compiled the reports only for one minister out of over 40 ministers to say that the government does not recognize the panel reports.

“He is not being paid by Buhari. He doesn’t have one kobo to pay him. The money we are paying ministers who are serving Nigerians is the money that tax payers are paying so for a minister who collects salary from Nigerians to say that there was no massacre, it shows that minister needs to be arrested and prosecuted, but it’s quite unfortunate”.