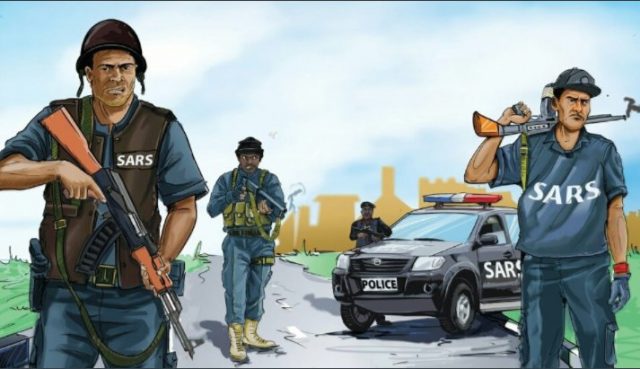 Some Nigerian celebrities have joined the trending ashtag movement, #EndSARS, which continues to dominate Twitter voicing their opinion on alleged police brutality.

The trend emerged on Saturday when various individuals took to the social media to condemn the operation of narrating their experience of police brutality.

The victims claimed that SARS disregard for human lives had culminated in the lives of many innocent victims.

While calling for an end and reformation to the operation of the squad, they accused SARS of maltreating and torturing innocent citizens at will.

Due to the increased outcry on social media, Nigerian artistes Simi, Adekunle Gold, DJ Spinal, Don Jazzy, Falz, and other celebrities including Ebuka Obi-Uchendu, Omojuwa and the former Minister of Education, Oby Ezekwesili among others joined voices to call for the end of SARS.

Over 100,000 tweets from concerned Nigerians. The people don’t feel protected. If we cannot FixSARS then #EndSARS.

The entire police force needs some serious revamp. SARS are particular notorious for brutal attacks on innocent youth. The police is not our friend #EndSARS

You need not have experienced the menace called SARS to call for #EndSARS , you have friends and relatives. Certainly not all your folks live inside Aso Rock. I don’t support reforms here, it should be deleted, trash emptied too.

Can never forget November 2005, driving in Abuja with @sommbonu and @IAMOfem. Stopped by a plain clothes officer with a gun, chased and actually being shot at for being “suspected armed robbers”. Ofem still has the bullet scars on his shoulder.#EndSARS

I hope that a segment of all who are ENRAGED at the allegations of #SARS violence&harassment will SUSTAIN the advocacy UNTIL .@AsoRock takes #SwiftAction with .@PoliceNG ? It does take SUSTAINED ADVOCACY. You people MOVE ON TOO QUICKLY leaving MOST issues you RAGED on UNFINISHED.

People are not supposed to be afraid of the people that are supposed to be looking after us. A couple weeks ago, at almost midnight, my friends and I had a gun pointed at us for laughing. For laughing. #EndSARS #ActuallyTakeGunsAwayFromTriggerHappyPeopleWhoHideBehindTheUniform!

Their boss had to talk him down! Pointing a gun at 3 ladies because of your insecurities is incredibly frightening! Policemen need to be mentally evaluated and checked before being handed guns. And they need to be accountable!! Otherwise, they can get away with anything. #EndSARS

I have experienced the brutality from some power drunk #SARS police officials as well. Hoping the govt can act swiftly on this one.

They’ll go through your phone and be looking for the international calls you made, because you have to be a fraudster to call your loved ones abroad. This Rubbish needs to stop.

I’ll never understand why a police officer will forcefully arrest you and take you to the nearest atm to withdraw your money for them. Robbery!