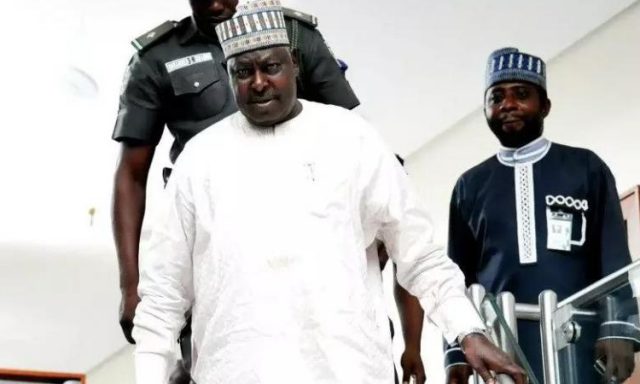 The Economic and Financial Crimes Commission (EFCC) has said it is still investigating the former Secretary to the Government of the Federation (SGF), Babachir Lawal, and will act based on the outcome of the probe.

Spokesperson of the agency, Wilson Uwujaren, said this on Tuesday during the Channels Forum which brought together experts and policymakers to discuss key issues in the country.

This comes amid questions about the fate of the former SGF who was fired after being indicted for corruption and investigated for the same.

Critics of Muhammadu Buhari, the President of Nigeria, have argued that the failure to prosecute Lawal and other people close to his administration or in his party, the APC, hurts his much-talked-about anti-corruption war.

At the forum, a former Chairman of the National Human Rights Commission (NHRC), Chidi Odinkalu, brought up the issue, while explaining why he believes the fight against corruption has been discredited.

“If the [now former] Secretary to the Government of the Federation has been investigated by the Vice President, the National Security Adviser and the Atorney-General of the Federation on the basis of which the President has fired him and you are telling me that that is not authoritative enough to send him to court, there is a problem.”

The EFCC spokesperson who confirmed that “the case involving the former Secretary to the Government of the Federation has been investigated by at least two panels before now”, explained that it had not been forgotten.