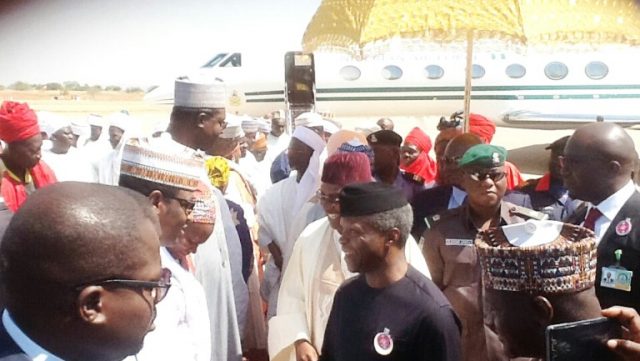 Vice-President, Yemi Osinbajo, has landed in Numan, Adamawa state, to condole with the people of the area over the recent spate of violence which led to several deaths.

Theadvocate.ng reports that attacks by opposing sides in the area have led to dozens of deaths in the last two weeks.

On Monday, fresh fighting erupted in a predominantly Bachama community, in what locals said was a reprisal by their Fulani neighbours whose relatives had earlier been killed.

Theadvocate.ng also gathered that homes were set alight as locals were killed and some fled into the bush early on Monday.

After arriving Yola Airport, where he was received by Governor Jibrilla Bindow, Osinbajo proceeded to the palace of the Lamido Adamawa, Barkindo Mustapha.

The vice-president held a closed-door meeting with Mustapha and other chiefs across the state.

He then proceeded to Numan, where he was received by the chief of the community, the Hamma Bachama, Honest Irmiya, in his palace.

“I am here on Mr. President’s instruction; he wants a first hand report of what happened in Numan and Mubi earlier,” Osinbajo said, promising that, “a permanent solution would be worked out”.