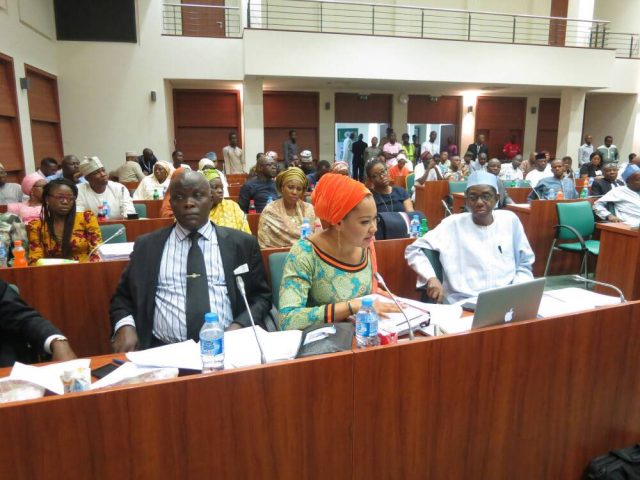 The Minister of State for Solid Minerals Development, Abubakar Bwari, on Monday said Federal Government could not complete the Ajaokuta Steel Company Limited due to lack of fund.

This Followed a disagreement with an ad hoc committee of the House of Representatives chaired by the Majority Leader, Femi Gbajabiamila, during a public hearing on the troubled steel plant.

The House is against the Federal Government’s plan to give the plant to private investor as a concession and had a running battle with the former Minister of Solid Minerals, Kayode Fayemi, on the issue.

In March, the House speedily passed two bills in a bid to stop the concession, advising the Government to instead complete the plant as a going public asset.

The two bills, sponsored by 301 lawmakers, were, ‘A Bill for an Act to Provide for the Ajaokuta Steel Company Completion Fund for the Speedy Completion of the Project; and for Related Matters’ and ‘A Bill for an Act to Amend the Public Enterprises (Privatisation and Commercialisation) Act, Cap. P38, Laws of the Federation of Nigeria, 2004 to Review the List of Enterprises to be Privatised; and for Related Matters’.

But, on Monday, Bwari appeared before the Gbajabiamila Committee to defend the government’s decision to give out the plant as a concession.

“With concession, the Government will not put more money, but will appoint a reputable Transaction Adviser to move forward. Right now, the Government does not have the funds. It is important that we hand it over to those who have the resources.

“The Government is even borrowing to run services. That is to tell you that there is no money,” the minister stated.

Bwari added that it would cost the Government far above the $500m being reported as the amount required to complete the plant and run it.

He explained that the reported 98 percent completion frequently quoted had to do with the plant only and did not cover external and pending internal works to be done before production would start.

However, members disagreed with him, saying the problem of the steel firm was the lack of political will by successive governments to complete it.