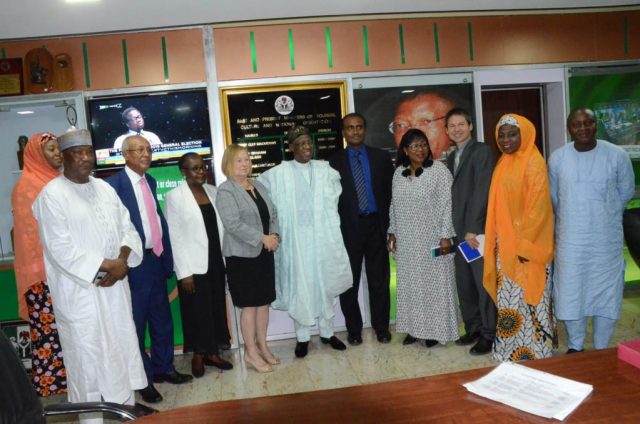 The Minister of Information and Culture, Lai Mohammed has expressed willingness of the Federal Government to partner with the Voice of America (VOA) to combat fake news in the country.

Mohammed made this known when he received a delegation of the management of VOA led by its Director, Amanda Bennett, on Tuesday in Abuja.

The minister, who said that VOA had done a lot in promoting very fair reporting about Nigeria, urged its management and reporters to continue in the tradition.

He said the greatest challenge facing the entire world was fake news, adding that even the BBC recently reported that herdsmen/farmers clashes and other crisis was fuelled largely by fake news.

Mohammed added that the problem that the country would face in the upcoming general election was the phenomenon of fake news, which was a threat to democracy and corporate existence of Nigeria.

“We seek your cooperation in the resolve of the VOA to partner with us to combat fake news because the first victim of fake news is the media.

“Your visit at this period is important because it will really help VOA to understand the dynamic of politics of the country.

“And this visit is a very good opportunity for us to call your attention to rampant misrepresentation of event in Nigeria by the media, both local and international,” he said.

He said the reporting of the country’s fight against Boko Haram was not being reported in the correct context, especially the farmers/herdsmen clashes were being misrepresented as ethno-religious crisis of which it was not

He said the present administration had recorded tremendous success in the ongoing fight against Boko Haram, adding that all the territories that were hitherto under Boko Haram were liberated.

Earlier, Bennett, said VOA provides around the world fair, objective, neutral and fact based information and it would expand its presence in the country.

According to her, even though VOA was hundred per cent finance by the US Government, however, it was completely independent when it comes to news judgement.

“That is one thing that makes it possible for us to pursuit news independently without any interference.

“We are here to partner with the Ministry of Information and Culture and we hope to play an important role,“ Bennett said.