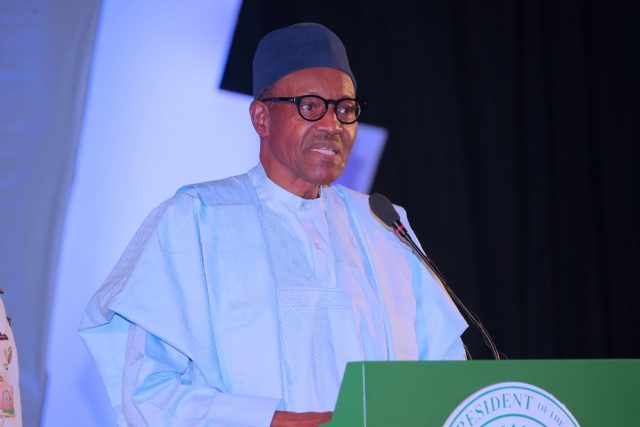 Muhammadu Buhari, the President of Nigeria has reiterated that the fight against graft remained his administration’s primary objective.

He also vowed not to relent in killing corruption before it did an irreparable damage to the nation.

The President made this promise in a nationwide broadcast in commemoration of the nation’s Democracy Day early on Tuesday.

“The second primary objective of this administration is to fight corruption headlong. Like I have always said, if we don’t kill corruption, corruption will destroy the country.

Three years into this Administration, Nigerians and the international community have begun to applaud our policies and determination to fight corruption. We are more than ever before determined to win this war, however hard the road is, I, therefore, appeal to all well-meaning Nigerians to continue to support us in this fight .

“Various policy measures already put in place to stem the tide of corrupt practices are yielding remarkable results. Some of these key reform policies include: Treasury Single Account (TSA), which has realised billions of naira being saved from the maintenance fee payable to banks. N200bn has also been saved from the elimination of ghost workers in public service.”

President Buhari alao noted that the whistle -blowing policy had helped the government to recover over N500bn.

“The Presidential Initiative on Continuous Audit, set up with a mandate to validate controls, assess risks, prune personnel costs and ensure compliance with Public Financial Management reforms, has helped to identify and remove over 52,000 ghost workers from the Federal Government ’s MDAs Payroll.

“The Voluntary Asset and Income Declaration Scheme (VAIDS) aimed at expanding tax education and awareness has offered the opportunity for tax defaulters to regularise their status in order to enjoy the amnesty of forgiveness on overdue interest, penalties and the assurance of non -prosecution or subject to tax investigations.”

He explained that the Sovereign Wealth Fund project portfolio had been expanded with an injection of $ 650m so as to strengthen its investment in local infrastructure, power health, reconstruction of the Abuja-Kano Road, Lagos-Ibadan Expressway, East -West Road (Section V ) and the Mambilla hydro-electric power project as well as the construction of the 2nd Niger Bridge.”

Speaking further on the anti -graft war , Buhari noted that the fight against corruption, through the Economic and Financial Crimes Commission (EFCC) and the Independent Corrupt Practices and other related offences Commission (ICPC), had resulted in the recovery of billions of naira, as well as the forfeiture of various forms of assets .

“We have retained the services of one of the world ’s leading assets tracing firms to investigate and trace assets globally. This is in addition to the exploitation of provisions of existing treaties, conventions as well as bilateral agreements with multilateral bodies and nations. Nigeria has also signed Mutual Legal Assistance Agreements to ensure that there is no hiding place for fugitives.”
Buhari added that through prudent spending and blocking of leakages, the nation’s foreign reserves had improved to $47.5bn as of May, 2018, as against $ 29.6bn in 2015.
The inflationary rate, he added, had consistently declined every month since January, 2017.