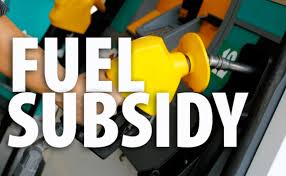 The Nigeria Labour Congress ( NLC) has again lashed out at the Federal Government over the planned removal of fuel subsidy-.

In a statement, the labour union described as laughable the announcement that 40 million Nigerians would be given N5000 each to cushion the effect of the removal of oil subsidy.

NLC said it would not allow itself to fall into a trap that Government was setting for the citizens.

In a report by the BBC Hausa Service, Comrade Ayuba Wabba of the NLC, said the Group Managing Director of the NNPC, Malam Mele Kyari, had increased the price of petrol to 340 from February, a development that does not go down well with Nigerians.

According to the NLC, the thought of giving N5000 to 40 million Nigerians, was amusing because if the sum total is calculated, it will surpass the amount of the oil subsidy Nigerians were enjoying.

NLC said the removal of subsidies will further plunge Nigerians into more hardship.

The workers expressed sadness that among the members of OPEC, Nigeria is the only country that does not refine its oil at home.

The Labour leader, therefore, urged the government to revive Nigeria’s 4 refineries so as to boost domestic production of petrol.