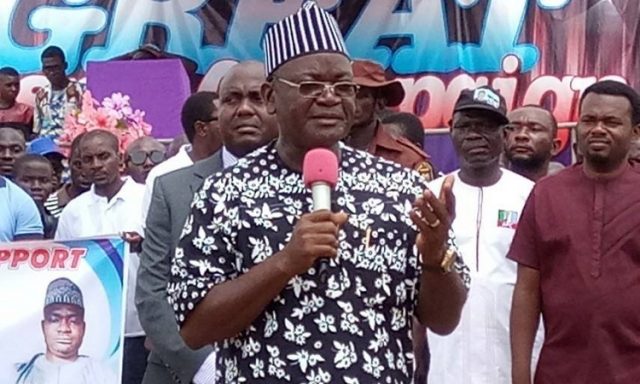 Benue Governor, Samuel Ortom has warned Agatu youths in the state to give peace a chance or face the consequences of their recalcitrant actions.

Ortom read the riot act in Makurdi when people of Agatu led by the Och’Agatu and other prominent members of the area, paid him a courtesy visit.

The Governor distanced the Government from the purported release of N40 billion by World Nations Development Programme (WNDP) to build housing estates for communities ravaged by recent conflicts in the state.

He described the allegation that he collected the said money as baseless and mere concoction by mischief makers aimed at tarnishing his image.

”Neither me nor the Program Coordinator, Noah Adeboh collected any dime from WNDP. They are going to execute the project at no expense of the villagers nor government,” he said.

Ortom disclosed that the WNDP would build the 2000 units of two bedrooms for free in Agatu, Guma and Kwande Local Government Areas.

Ortom said he was pained that the Agatu youths were opposing the construction of the housing estate, demanding for compensation before work could start.

“Go back to your community and speak with the youth; as a father of the state I will give them another opportunity to retrace their steps or the project will be moved elsewhere.

“I want Agatu to be developed and that the reason why I awarded the road from Oshugbudu to Ogbagaji and others is to make the place better and developed,” he said.