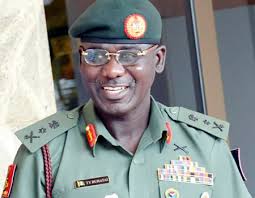 The Independent Corrupt Practices and Other Related Offences Commission (ICPC) has reacted to the viral news report saying that  it recovered N170 million cash, $220,965, G-Wagon from the residence of Nigerian Ambassador to Benin Republic, Lt. Gen. Tukur Buratai.

Reports have been circulating that the ICPC recovered N1.85 billion from a house and office belonging to Buratai in Abuja.

The report which has been making the rounds alleged that the money is part  part of the billions of naira budgeted for the purchase of arms and ammunition by the President Muhammadu Buhari-led government.

Reacting in a statement  ICPC spokesperson, Mrs Azuka Ogugua  debunked the claim that house belonged to Buratai, saying that the property is owned by owner of K Salam Construction Company, a military contractor by name Kabiru Sallau.

She said, “The attention of the Independent Corrupt Practices and Other Related Offences Commission (ICPC) has been drawn to some inaccurate and concocted reports in the media about the seizure of multibillion-naira cash, dollars, Rolex watches stockpiled in an Abuja property.

“The Commission wishes to state that ICPC operatives raided a property in Wuse 2 of the Federal Capital Territory (FCT), Abuja, on Thursday, 16th June, 2022 between 5:00pm and 12:00am in suspicion of money laundering . Facts available for the time being indicates that the property is owned by owner of K Salam Construction Company, a military contractor.

“The Commission is yet to conclude its investigation and prefers not to preempt its outcome and also avoid the frenzy of a media trial.”