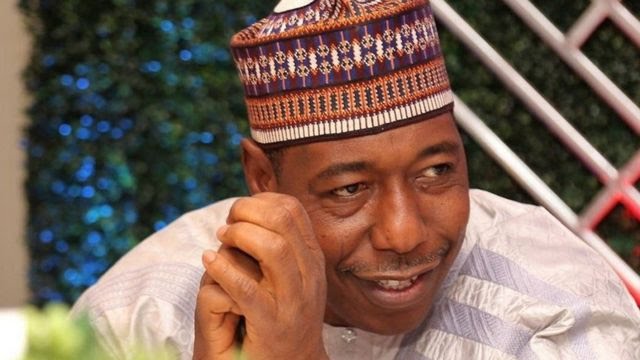 Governor Zulum has expressed his displeasure over the attack on his convoy by terrorists on Wednesday, stating that he will deploy hunters if the military is unable to secure Baga.

The governor reacting to the attack on Thursday said, “We have over 1,181 soldiers in Baga; 72 officers, 107 soldiers, 400 soldiers in Mile 4 and 1,900 soldiers in Monguno. I see no reason why Boko Haram will not stop to operate in Baga town.

“The troops have been in Mile 4 for over one year, there is complete sabotage, the problem is not with President Buhari, or General Buratai but the command and control structures. There is a need to look into the command structure.

“We have over 80,000 IDPs in Monguno, they cannot continue to depend on NGOs and others for food, we have created opportunity for them to go back to their communities and continue with their business and farming activities.”

He said: “After Sallah, we will go back to Kukawa. We will give time to the military; but if they will not clear Baga, we will mobilise our hunters and vigilantes to recapture Baga… we can’t continue like this. People have to take their destiny in their hands.”

The military, however, said it would investigate the attack on the convoy.

The military authorities in a statement by the spokesman of the Army, Col. Sagir Musa, who confirmed the attack on the convoy of the governor, admitted that the Governor had earlier paid a visit to the Commander, 19 Brigade, at the Nigerian Army Super Camp Baga where he was fully briefed about the prevailing security situation in the general area.

Musa said. “The unfortunate incident occurred shortly after the Governor and his entourage departed the Super Camp to visit other parts of Baga town. The incident forced the Governor to abort his planned movement to Baga.

“Although, details of the unfortunate incident are sketchy and under investigation, efforts are ongoing to comb the area where the incident occurred with a view to track down and deal decisively with the attackers. An investigation is also in progress to identify the circumstances that led to the attack.

“Regrettably, this is an isolated and most unfortunate incident that occurred in a territory where normalcy has since been restored with socio-economic activities picking up. The Nigerian Army wants to reassure the general public that this will be interrogated with a view to forestalling future re-occurrence.

Widows, IDPs knock FG over amnesty for B’Haram fighters
“Additionally, Nigerian Army wishes to inform the general public that it will continue to discharge its responsibilities professionally with respect for the fundamental human rights of all Nigerians and in compliance with the extant rules of engagement. The good people of Baga town and indeed the entire Borno State are enjoined to continue to provide credible information that will assist the security agencies to successfully combat terrorism as well as apprehend and flush out the perpetrators of the attack.”

Narrating the ordeal of the convoy, the Special Adviser to Governor Babagana Zulum of Borno State on Media, Isa Gusau, said his principal embarked on a trip to Baga area of the state based on information provided by soldiers that they have liberated the town from the hold of Boko Haram insurgents.

Gusau, while speaking in an interview on BBC Hausa Service on Thursday monitored by our correspondent, said the governor and his team were in good condition.

Although the spokesman said he was not in the governor’s convoy but stressed that the soldiers, before the trip, had assured the governor, who was on a humanitarian mission to Baga, that the town was no longer taken by the insurgents.

He said, “I was not there physically. The governor was heading to Baga from Munguno because the soldiers told him they have liberated Baga from the control of Boko Haram.

“But along the way, the insurgents opened fire on the governor’s convoy and everyone scampered for their lives.”

Gusau explained that some of those in the convoy including policemen, government officials, amongst others, sustained injuries in the process.

“They crawled for a distance on their knees. They sustained injuries. The Boko Haram insurgents were shooting,” he added.

Meanwhile, the governor returned back to the state capital on Thursday afternoon and expected to celebrate the Eid-el-Kabir in Maiduguri with the rest of the Muslim faithful.