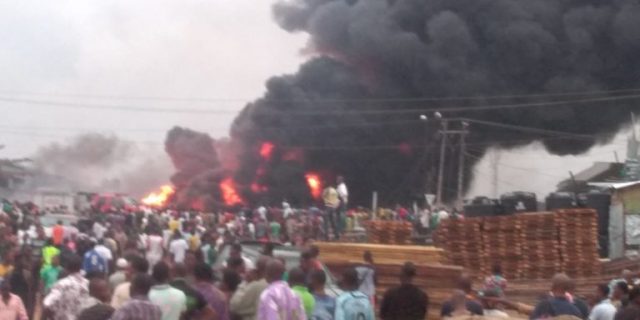 Gov. Babajide Sanwo-Olu of Lagos State on Wednesday promised that his administration would give all needed support to victims of the ljegun pipeline fire explosion to aid their recovery.

Sanwo-Olu gave the assurance in an interview with newsmen shortly after his visit to the victims who were receiving treatment at the Trauma and Burns Centre in Gbagada General Hospital, Lagos.

The governor, who described the incident as unfortunate, expressed his condolence to families of victims who had lost their loved ones to the inferno.

“I have seen the patients; I have spoken to them and encouraged them.

“I have given my words that the management of the hospital should continue to do everything they need to do to give them comfort.

“They confirmed that they have been very supportive, and I assured them that the state government will ensure that as humanly possible, we will keep all and every one of them alive,” he said.

Sanwo-Olu said that the issue of pipeline fire caused by vandalism was a security and crime affair which the appropriate authorities were already looking into.

He appealed to residents to desist from engaging in nefarious activities, while those living in areas prone to such should report whenever they sight the vandals.

“We will not shy away from apprehending the culprits and make them to face the wrath of the law.

“Residents in that place have the emergency toll free 7-6-7; 1-1-2 number, let them call; when you see people at odd hours of the day going to those places, call the Rapid Response.

“With this, we can scale up security operatives to come there and apprehend perpetrators of this act,’’ Sanwo-Olu said.

The fire explosion which occurred on July 4, destroyed property worth millions of naira and claimed some lives.

It was caused by vandals who were siphoning fuel from the NNPC pipelines in the axis.