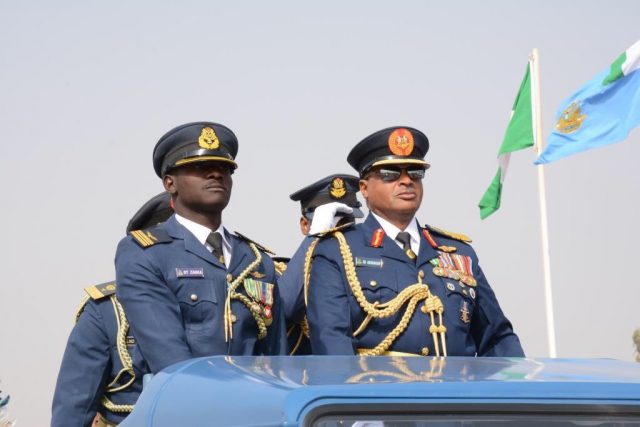 The Chief of Air Staff (CAS), Sadique Abubakar, has tasked officers and men engaged in the fight against insurgency and banditry to ensure strict professionalism in their dealings.

Abubakar made the call on Saturday while hosting members of the Air Component of “Operation Lafiya Dole” to Eid El-Fitr lunch at the Yola Air Force Base.

Abubakar, who was represented by the Commander of the Air Task Force of Operation Lafiya Dole, Idi Lubo, said he was satisfied with the commitment shown by the Force in the fight against insurgency and urged officers to sustain the tempo.

He said the Nigerian Air Force (NAF) remained committed to supporting ground troops in ensuring total elimination of the insurgents and bandits.

He extended the goodwill message of the President and Commander in Chief to the troops and assured them of sustained support in areas of equipment and welfare to continue to deliver in containing security challenges.

The commander of the Yola NAF Base, Anthony Ndace, lauded the CAS for the launch, which he described as part of gesture to motivate officers and men.

Ndace listed the recent launch of accommodation quarters and other projects in the base by the CAS and assured him of personnel loyalty and commitment toward discharging their duties.

He noted that “this shows commitment of the CAS to motivate personnel. We, the commanders are learning on your exemplary leadership.

“I want to pledge our loyalty to the President and Commander in Chief, and to assure you of our total commitment to the discharge of our assigned tasks.”