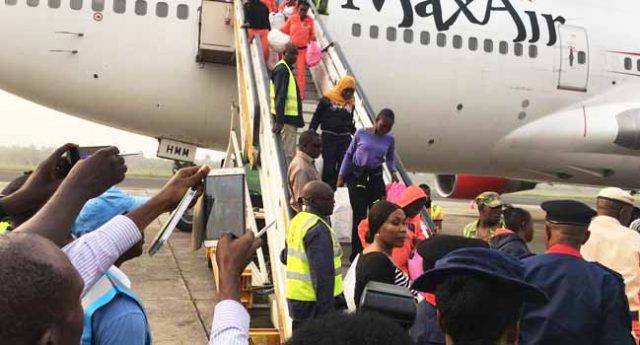 The International Organisation for Migrants (IOM) has evacuated 186 more Nigerians who voluntarily returned from Libya.

The returnees were received in two different flights within 24 hours by the National Emergency Management Agency (NEMA) at the Murtala Muhammed International Airport (MMIA), Ikeja.

The first flight with 154 returnees arrived the airport at 8:45p.m on Thursday aboard a Chartered Libya Airline with registration number 5A-DMG, they were received at the Cargo wing of the MMIA.

After profiling of the returnees on each exercise, 99 female adults and 75 male adults with eight infants and four children were indicated.

The Zonal Coordinator of NEMA, Yakubu Suleiman revealed that the new arrivals were those residents in Libya but voluntarily decided to return home when the opportunity came from IOM.

He added that the attempt to earn better life in Libya was futile, hence their decision to return home.

Suleiman implored the returnees to engage in meaningful and decent activities as they cannot be treated as second-class citizens in their homeland.

The Federal Government policies, he noted, are available to give equal opportunities to every Nigerians to make maximum use of their potential amidst various incentives.

Already, IOM has started training those that had arrived the country in the past in batches on reintegration exercise.