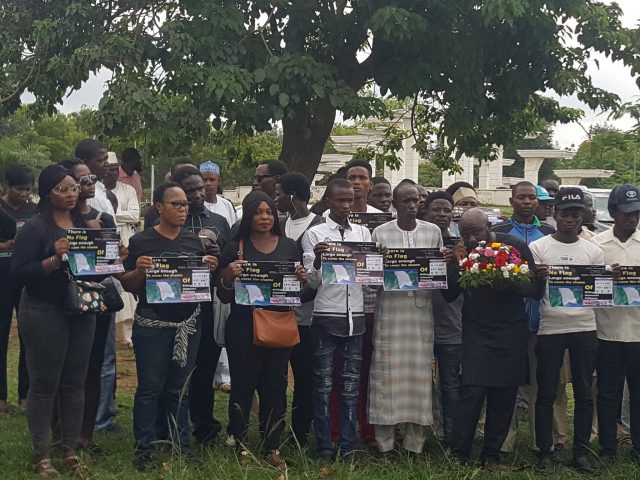 A group of Nigerians on Monday described as ‘ineffective’ the conduct of the country’s service chiefs in finding a lasting solution to increased mass violence.

They therefore called for their immediate removal.

The group cuts across Nigerians of various divides and interests and they all rallied at the Unity Fountain in Abuja to observe a National Mourning Day for lives lost to violence in the wake of increased mass killings in the country.

The event was organized by the Joint Nigeria Crisis Action Committee (JN-CAC).

Chidi Odinkalu, a convener of the JN-CAC said the central message of the rally was the removal of all the service chiefs in the country.

“All of them should go, they have been ineffective in handling these crisis and violent killings going on in the country,” Odinkalu, a former chair of the National Human Rights Commission, said.

Since January 1, Benue, Kaduna, Rivers, Taraba, Zamfara, Adamawa, Edo and other states have been major scenes of carnage.
Over 70 residents were killed when suspected herdsmen invaded villages in Logo and Guma Local Government Areas in Benue State earlier in January. The attackers also ambushed a police patrol team and killed three officers on January 8.

More recently, about 19 persons were killed including two priests in a church in the same state with 50 houses burnt barely a few days after Nigerian soldiers stormed another community in Benue and set dozens of houses on fire.

Recently also, about 87 people were kidnapped along Birnin-Gwari/Kaduna road. And a week before then, tens of people were massacred in Gwaska village of Kaduna State.
There have also been series of mass killings in Zamfara State.
According to the JN-CAC, in the first 70 days of 2018, over 1,400 persons were killed violently across the country.

As the body counts increase, Nigeria’s security agents are accused of a lackluster attitude in dealing with the crisis.

The rally was not disrupted by the Police who had placed an indefinite ban on daily sit-outs at Unity Fountain.