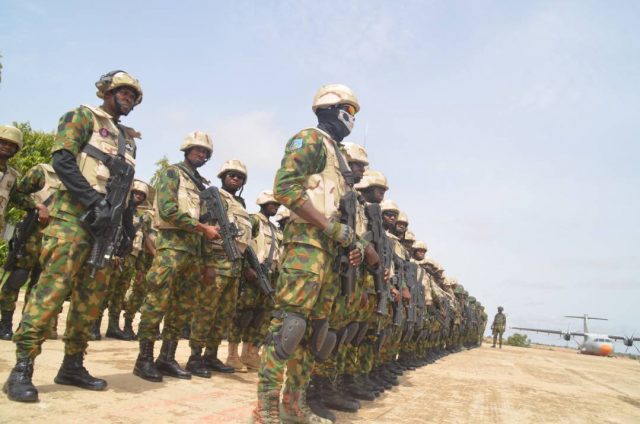 The Chief of Air Staff, Sadique Abubakar has urged officers and men of the Nigerian Air Force (NAF) to redouble their effort in clearing the remnants of insurgents in the North East.

Abubakar made the call Saturday in Yola while addressing Officers and Airmen at the Yola Air Force Base.

“I want you to keep working hard, redouble your efforts and see how we can clear the remaining mess in the North East as quickly as possible.

“You have put in a lot and you are working round the clock and I want to tell you that NAF is appreciative of your sacrifice, hard work, and diligence to ensuring that every part of Nigeria is secured,” Abubakar said.

He noted that NAF had established new wings in Nguroje in Taraba and other states with Special Forces to work hand in hand with the Army and other security agencies to ensure that killings were stopped in the areas.

Abubakar urged NAF personnel not to be distracted with social media campaign on their operations, adding that they have been mandated by the Constitution to protect the nation and its citizens.

“You should not be distracted by campaign of mischief because anyone who loves Nigeria will not be encouraging situations where people will be encouraging Nigerians to take arms against one another,” he said.

The CAS who directed the personnel to deal decisively with anyone carrying rifle to kill innocent citizens, however, urged them to operate within the rules of engagement.

“Show respect for dignity of innocent people and threat them as human beings, but those that carry rifle to kill, be very decisive in dealing with them,” Abubakar said.