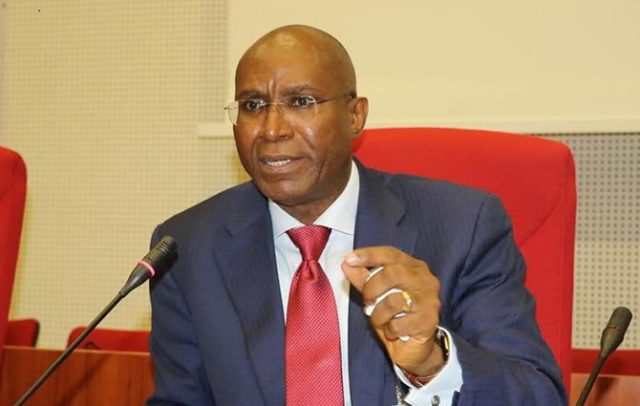 The Senator representing Delta Central District, Ovie Omo-Agege on Tuesday declined comments on the April 18 forceful removal of the Mace in the Senate chambers, saying the matter was pending at the court.

He made the remark in Abuja when he appeared before members of the Joint Ad Hoc Committee investigating the invasion of the National Assembly by hoodlums.

Omo-Agege had dragged the National Assembly to court to stop the investigation.

The committee had last week invited Omo-Agege and Mohammed Ndume over their alleged roles in the attack on the Senate.

The Delta senator allegedly led thugs to the Senate chamber to “steal’’ the Mace while plenary was ongoing on that day.

The incident occurred few days after he was suspended over a “dissenting comment’’ on Senate’s adoption of conference report on Electoral Act (2010) Amendment Bill and for taking the senate to court.

Before the probe panel, Omo-Agege said “I will wait until the outcome of the litigation before I speak on the matter”.

“Ordinarily, I would have loved to seize this opportunity to respond to the allegations you have raised.

“As a senator, consistent to standing orders, I’m here to inform you that I have gone to court. The parties of the respondents to the suit that I have commenced at the Federal High Court are here enumerated.

“The Senate of the Federal Republic of Nigeria; President of the Senate; Bala Na’Allah, and all members of the committee, Clerk of the National Assembly, Attorney-General of the Federation, Inspector-General of Police and the Department of State Service.

“This action was commenced on the May 21 and I have with me proof of service to indicate that all of the parties have all been served.”

Earlier, Chairman of the ad hoc committee, Bala Na’Allah, had told Omo-Agege that some persons who had testified at the probe fingered him as connected with the April 18 invasion of the senate.

The chairman said “some witnesses have mentioned your name (Omo-Agege). It is only fair that we invite you to shed more light on it.

He said that three witnesses were unanimous on the fact that from the first gate to the main gate of the National Assembly, the lawmaker “cleared’’ the hoodlums during security check and they were allowed in.

“At the entrance of the chamber, they accosted the men and allegedly, you said they were with you.

“The deputy senate president also testified before us and said he was presiding on that day and he noticed you coming with those men toward the Mace table and that as soon as you got to the Mace table, you turned left.

“And, the men took the Mace and left the chamber fighting everybody, and in the process wounding some people,” Na’Allah said.

He said that he was not served any summons from the court as claimed by Omo-Agege.

“I cannot be served by my office. You should know this.

“I have no problem receiving service, maybe, due to my inadequate knowledge of the law; the service has to be personal.”

The Chairman, however, said that the committee was not bound by law not to investigate the allegations against the lawmaker.

In his contribution, a member of the committee, Sen. Shehu Sani said that Omo-Agege should be able to defend his actions.

“I came here to hear a revolutionary speech to defend your actions. If he is not ready to speak, we should not sit here and be discussion other issues,” he said.

On her part, Co-chairman of the committee, Betty Apiafia, said that Section 62 of the Constitution did not stop the members from investigating the matter.