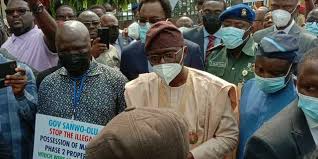 On Tuesday, the media was awashed with the story of “an unnamed Chief Superintendent of Police who declined Governor Sanwoolu’s Order to remove Police men from Magodo”

A lot of commentators have said his refusal was a slap on the Governor, but they never gave time to think that what happened yesterday was a triumph of our constitution.

In 1984 when the Military Government of Lagos state demolished the property of Shangisha Landlord Association without compensating them, instead of resulting to self help the association went to court.

The Lagos state high court ruled against Lagos state and said the association was entitled to right of first choice allocation of 549 plots. Instead of Lagos state to accept the verdict of the court in good faith, they decided to appeal the judgment. As at that time, there were less than 100houses compared with 6,000 houses today.

Since Lagos state has gone on appeal, was it not right for them to halt allocation or reserve 549 plots in case they fail at court?

Lagos state lost the appeal in 1992. Should Lagos State at this point not have called for a negotiation? No Lagos state did not do this because the thinking of Lagos State is that no citizen should be able to win lagos state in court. The interesting thing is at the court of Appeal, the Justice that gave the lead judgment against Lagos State is an indigene of Lagos state, Justice Oguntade.

Lagos State did not accept the ruling l, so they went to supreme Court, and in year 2012, Lagos state failed at the supreme court, the court of final decision.

Since the association will require Lagos High Court to issue a writ of execution. Lagos state frustrated the issuance of same. The Association petitioned the Chief Justice of  Nigeria who then sent a query to the then Chief Judge Atilade who then issued a the writ of execution. Again Lagos state did not accept defeat, they went ahead to cause division amongst the association and aided a fall out faction to get a Lagos State Judge loyal to Lagos state Justice Adebiyi to set aside a writ of execution granted by the chief Judge. Another petition was written against Justice Adebiyi, but on the day she was to attend to her petition at NJC in Abuja, she cried her heart out that she was about to lose her job and through the intervention of Mr. Olanipekun SAN lawyer to the association, then the petition was withdrawn and her job was saved. Later the Association found out they were deceived.

After all said and done In 2019, the association decided to write a fresh petition to the Attorney General of the Federation to give a legal advise. The AGF contacted the supreme court to find out if the judgment was indeed true after finding out the authenticity of the judgment. The AGF wrote to the Lagos State Attorney General Mr. Moyosore Onigbanjo on why the association has not been allocated 549 plots. Lagos state responded by saying they have not been able to identify those they were to give the land to. The AGF got back to the association with response of Lagos State. The association made themselves available to Lagos state. The AGF after waiting for 18months for Lagos state to meet with the association towards resolving the issue, but to no avail, issued a legal advise that the association is entitled to 549 plots in Magodo and the Police should protect them towards peaceful allocation of their Land.

On the 16th of November, 2021. The Inspector General of Police wrote a letter to the Governor informing him on police intention to come and levy execution. The IGP waited for more than a month and there was no response from the Governor. So on the 21st of December, 2021 the policemen moved into magodo.

After 2 weeks there was no call for meeting with the association, the Magodo Resident Association suspecting there may be continuation of the execution, came out on the 4th of January, 2022 to protest and this led to the Governor coming to Magodo.

Now the Governor is in Magodo. Issues arising.

1. Was the Governor right in telling the CSP to call the IGP? No because the Gocernor had already called the AGF.

Secondly, it is instructive to hear the Governor telling the CSP that if he should place the call to both the IGP and the AGF it will be tougher for the CSP.

Interestly, the Governor came out from the call and his countenance changed and affirmed that the association were his subject; the same association two weeks ago they had threatened to prosecute for criminal charges.

What truth did the governor hear from the IGP and the AGF that weakened him. Story for another day.

However, it has taken this action and 38 years for Lagos state to call this meeting with the association. Most of the members of the association died in time and are not able to witness this day.  But to those who are alive to see this day, this is a triumph to our constitution, triumph to the rule of law and triumph to human rights that when all have failed in the state we can call on federal to intervene.