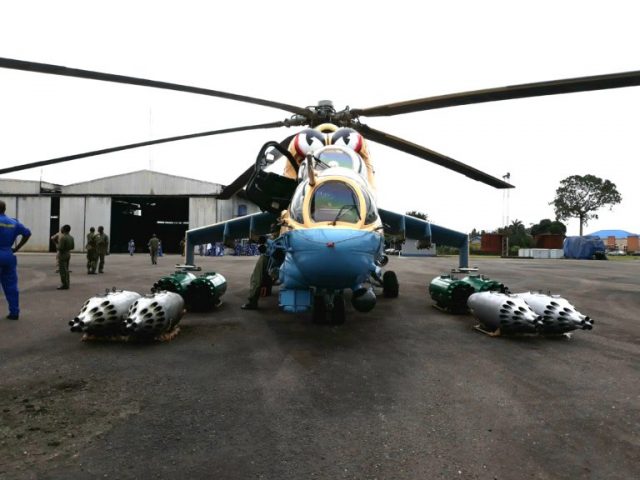 The Nigerian Air Force (NAF) has said it is taking drastic steps to stop the maintenance of Military aircraft and other assets abroad.

The Chief of Air Staff (CAS), Sadique Abubakar disclosed this at a ceremony to mark the completion of maintenance of Mi-35P attack helicopter at the 115 Special Operations Group in Port Harcourt on Saturday.

Abubakar, an Air Marshall said the measure was intended to cut cost and save the nation the millions spent on maintaining such aircraft abroad.

“If we had taken the Mi-35P helicopter to Ukraine we would have to pay for air freight to Ukraine and back to Nigeria. This excludes payment of repair of the aircraft.

“So, the decision to repair the aircraft in Nigeria is part of our plan to save the nation foreign exchange as well as build capacity of our technicians and engineers.

“This is the very first in the history of the Nigerian Air Force that we are conducting live extension programme (repairs) of our Mi-35P helicopter fleet in Nigeria.”

Abubakar said the repair work was carried out by its foreign partners with the support of technicians and engineers from the Nigerian Air Force.

“Another laudable achievement is the expeditious completion of engine two modular change on our EC-135 helicopter. We changed it here rather than take it to South Africa.

“The repair of the aircraft locally presented our team of technicians and engineers the opportunity to participate and acquire more knowledge.

“The whole essence is to ensure in no distant future that our technicians will independently carry out repairs on our Mi-helicopter fleets,” he said.

Abubakar noted that the repair of the helicopters had cut down the cost of repairing the aircraft abroad by 30 percent.

He said the helicopters would soon be deployed to Benue and Zamfara to complement joint intervention force in the troubled states.

The air chief said the air force was still awaiting delivery of 12 Super Tucano Aircraft from the United States and also working to acquire other aircraft and assets.