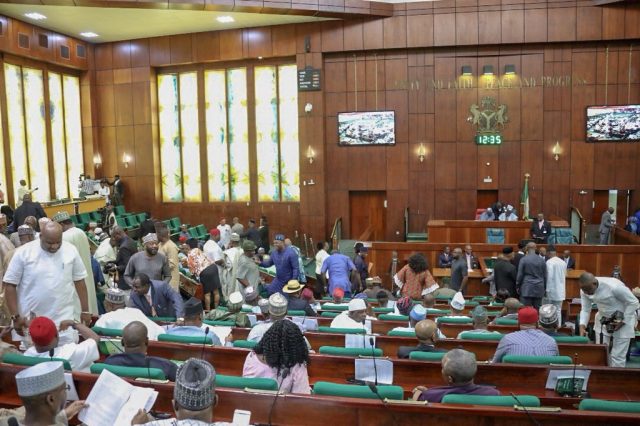 The Parliamentary Support Group, a group of Senators and members of the House of Representatives loyal to Muhammadu Buhari, the President of Nigeria has distanced itself from Tuesday’s resolution of the National Assembly.

After a joint closed door session, the National Assembly on Tuesday charged Buhari to take responsibility for actions of his appointees, desist from being selective in his anti-corruption war among other resolutions.

The Chairman of the National Assembly, Bukola Saraki, who read the resolutions added that the legislature will exercise its constitutional power if Buhari fails to act.

The resolutions, however, did not go down well with members of the support group.

In a statement Tuesday evening, the group said most people who spoke at the session were members of the People’s Democratic Party (PDP).

It claimed members of the ruling All Progressives Congress (APC) tactically avoided airing their views. However both chambers of the National Assembly are led by APC lawmakers (Saraki and Speaker Yakubu Dogara).

The PSG statement was signed by Abdulmumin Jibrin, a known member of the group. Other members of the group include Abdullahi Adamu and Ovie Omo-Agege.

It is however unclear if Jibrin got the permission of all members of the group to release the statement.

The group alleged that the questions, submissions and resolutions of the joint session were pre-determined by anti-Buhari lawmakers.

“That it is commendable that the Speaker tactically refused to make any comment at the session even after the Senate President took time to explain the issues which are mostly personal.

“That it is disturbing and raised many questions of pre-determined intentions that a known ally of the Senate President from Kwara State, Rasak Atunwa drafted what was adopted as the resolution and without voting against standard parliamentary practice

“That most of the issues raised concerning the fight against corruption, insecurity and the rule of law has been severally discussed in the Senate and the House and various resolutions passed.”

The group further commended the efforts of President Buhari in the fight against corruption, tackling of the insecurity challenges and respect for rule of law and democratic institutions.

“Mr President is known for his non interference policy.”

“That the PDP should recall how it members in the 7th Assembly sat comfortably in the chamber and watched a sitting Speaker, Aminu Tambuwal locked out of the National Assembly and all his security personnels withdrawn while APC members had to scale the fence to gain entrance into the National Assembly.”