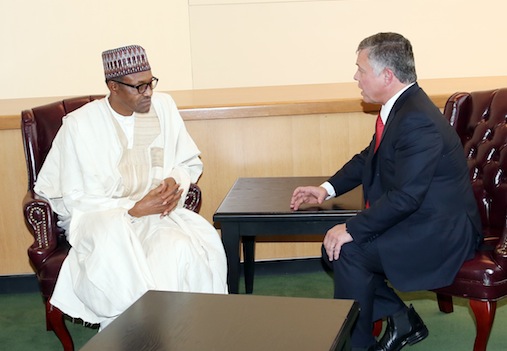 President Muhammadu Buhari has stressed the need for inter-regional cooperation and information sharing towards tackling terrorism across the world.

He made this known at a bilateral meeting between Nigeria and Jordan in Aqaba.

Buhari, who met with King Abdullah II of Jordan during the meeting, said these two factors are important in checkmating the threat of violent extremism to global peace and security.

The President used the opportunity to thank the Jordanian King for his constant support and assistance to Nigeria especially with the recent donation of armoured vehicles and other Military equipment to fight terrorism and insurgency in Nigeria.

In his remarks, King Abdullah II advocated broader measures especially the use of cyber security in checking the influence of terrorists.

He pledged the continued support of the Kingdom of Jordan to Nigeria in its war against violent extremism.

Also speaking to journalists after the bilateral meeting, the Minister of Foreign Affairs, Geoffrey Onyeama, said Nigeria and Jordan would co-host the counter-terrorism summit on December 3.

“And for the meeting tomorrow we also looked at the format because Mr President is the co-host together with the king of this Aqaba Process.

“There are going to be a number of Heads of state who would be attending from Africa.

“There are also high level officials from outside Africa, particularly from United States, Europe and so on.

“So, it is important to take advantage of this platform to really develop roadmap of going forward in addressing comprehensively the challenges posed by countries with violent extremism.

“The King highlighted the fact that it is also important that a lot of people that would be presence would want to hear from Mr President all the challenges that we are facing as a country.”

Buhari and five other West African Heads of State, representatives of governments of 48 countries and a number of key Non-Governmental Organisations (NGOs) are expected to attend the counter-terrorism summit.