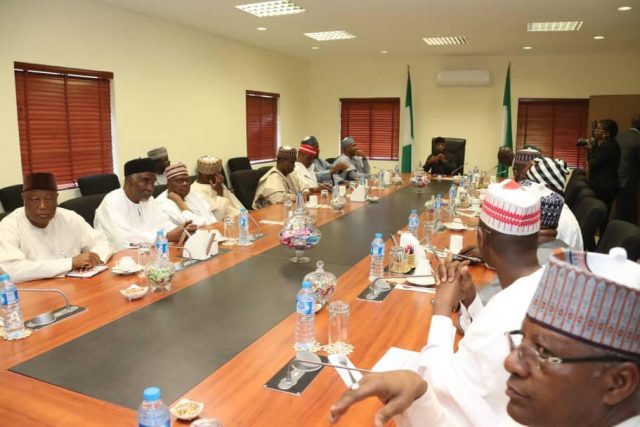 The All Progressives Congress (APC) has said no demand was made to stop the trial of the Senate President, Bukola Saraki, at the meeting between the Vice President, Yemi Osinbajo, and former members of new Peoples Democratic Party (nPDP).

APC Deputy National Chairman (North), Lawal Shuaibu, made this clarification in a statement on Thursday.

Saraki has been standing trial since 2015 before the Code of Conduct Tribunal (CCT) for alleged false asset declaration.

The Advocate reports that Saraki, who was present at the meeting also denied the rumour that his case was one of the issues discussed.

Shuaibu who was the representative of the APC National Chairman, John Odigie-Oyegun, in the talks with the nPDP members, said the meeting agreed to reconvene next Monday with a smaller group of eight, which will comprise the Vice President, the Attorney-General, himself (Shuaibu) and five representatives of the former nPDP members.

“There was no time during Monday’s meeting the condition was given that Bukola Saraki’s CCT trial must be withdrawn,” he said.

He said while Monday’s meeting attended by 20 former nPDP members dwelt on ‘general discussions’, the next one on Monday will “go into the business of discussing the [former nPDP] specific demands”.

“When we got to the meeting venue in Aguda House, the Vice President felt we were too many. He said for the meeting to achieve any meaningful result, we needed a much smaller group. On that, there were debates as to how many people.

“We said when they (nPDP) are ready with their five representatives, then we will sit down and go into the business of discussing the specific demands. There was no time during Monday’s meeting the condition was given that Sen. Bukola Saraki’s CCT trial must be withdrawn.

“I don’t know where they got that story from. I have a strong feeling that whoever wrote that story was only being speculative because nobody could have said that.”

Shuaibu added the basis for last Monday’s meeting was the content of the former nPDP’s letter submitted to the Party and copied to the President and Vice President.

The nPDP in that letter said its members were being marginalised and not appreciated for their efforts in the party’s victory in 2015.
“The content of the letter which is now public, that is what the basis of their demands are. At the next meeting on Monday, we will go into the specifics. That letter will be x-rayed point by point,” he said.