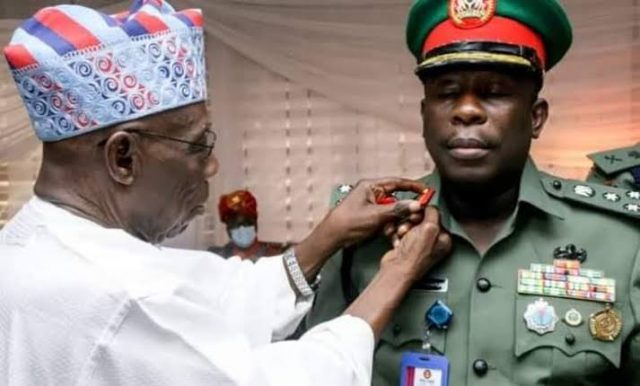 Although the decoration is usually done by the spouse and a superior officer, Obasanjo was accorded the honour being a former Commander-in-Chief.

The former President was accompanied by the Towulade of Akinale Kingdom of Egbaland, Oba Olufemi Ogunleye.

Adeboye, an Engineering Corps member, holds two Master’s degrees and other qualifications. He served in many operations and formations in Nigeria and abroad.

On September 8, 2014, the senior officer, then a Lieutenant Colonel, was shot by Boko Haram in Baza in Adamawa State. He was hit in the leg.

Some Soldiers under the platoon he commanded died in the attack. Adeboye had been deployed to the battlefield from 3 Division in Jos, Plateau State.