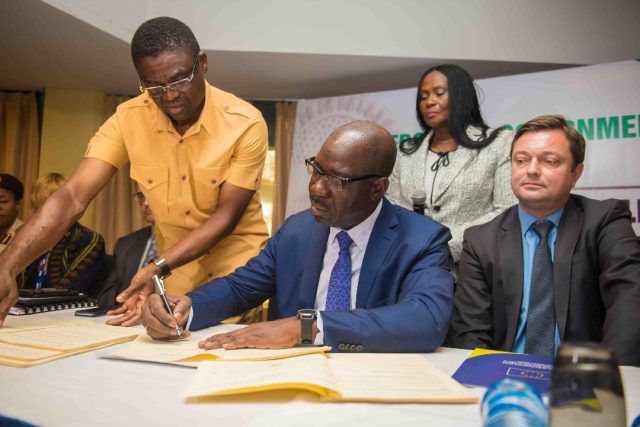 Obaseki signed the bill into law on Wednesday in Abuja at aceremony which held on the sideline of a high profile stakeholders’ event,with the theme “Technical Roundtable on Managing Migration through Development Transformation Programme in Edo State”.

It had in attendance, Ambassador of European Union to Nigeria, Ketil Karlsen and the Chief of Mission, International Organisation for Migration, Enira Krdzalic.

Others dignitaries were the Ambassador of Denmark to Nigeria, Torben Getterman; representative of the Nigeria Immigration Service; World Bank Country Director, Rachid Benmessaoud; representatives of The Netherlands and members of the Edo State Executive Council.

According to Obaseki, “the law provides an effective and comprehensive legal and institutional framework for the prohibition, prevention, detection, prosecution and punishment of human trafficking and related offences in Edo State.”

“The law will protect victims of human trafficking, promote and facilitate local, national and international cooperation in the fight against the illicit activity.”

He added that with the law which also establishes the Edo State Taskforce Against Human Trafficking, the stage is set for an onslaught against perpetrators of human trafficking in the state.

He disclosed that the state has secured the support of the international community in the fight against human trafficking and urged parents, guardians, trade and professional groups, the clergy and other stakeholders to join hands with his administration as the law, which complements existing federal government laws, takes effect.

The Edo State government currently has a robust plan for the rehabilitation of returnees from Libya and elsewhere, most of whom were evacuated by the federal government and the International Organisation for Migration (IOM) and the European Union.

The programme includes a monthly stipend of N20,000 for each returnee, an empowerment package that has a training component, after which they are given starter packs.