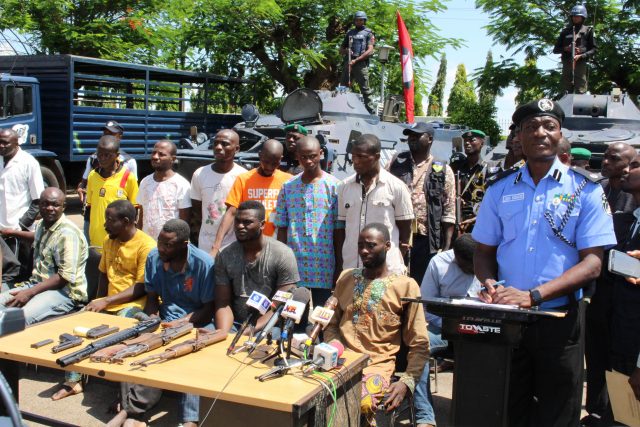 The Police have invited the Senate President, Bukola Saraki, for questioning over alleged criminal indictment by five suspected gang leaders involved in the recent Offa bank robbery in Kwara.

The Force Spokesman, Jimoh Moshood, made the disclosure while briefing journalists on the update of the Offa bank robbery on Sunday in Abuja.

Moshood said that the suspects confessed and volunteered statements that they were political thugs of Saraki and Kwara Governor, Abdulfatah Ahmed.

The armed robbers attacked five commercial banks and a Police station, killing 33 persons including nine policemen and a pregnant woman in Offa on April 5.

“The five gang leaders further confessed during investigation that they are political thugs under the name ‘Youth Liberation Movement a.k.a Good Boys,’” he said.

Moshood alleged that they also admitted to have been sponsored with firearms, money and operational vehicles by Saraki and Ahmed.

The Spokesman said that the Senate President should report to the Force Intelligence Response Team office in Guzape, Abuja.

Moshood said that the arrest of the suspects was made possible following the arrest of two principal suspects, Kunle Ogunleye, known as “arrow” and Michael Adikwu, an ex-convict.

“The two principal suspects confessed to be among the suspects led by the five gang leaders listed to carry out the Offa bank robbery,” he said.

He alleged that in the course of investigation, a Lexus jeep GX-300 with a sticker number plate with the inscription “SARAKI” used by the gang leader, Ayoade Akinnibosun, was recovered.

He said that the vehicle was taken to Government House, Ilorin on May 16 where the number plate was removed and replaced with another, Kwara, KMA 143 RM.

“The exhibit vehicle was subsequently recovered from the premises of Ministry of Environmental and Forestry in Ilorin, Kwara,” he added.

Moshood said that the sticker number plate removed from the vehicle was recovered from Adeola Omiyale who drove the vehicle to government house, Ilorin, immediately after the bank robbery.

He said millions of naira and 21 AK47 rifles belonging to the Police in Offa were admitted to have been carted away during the bank robbery.

Moshood alleged that the Personal Assistant (Political) to the kwara Governor, Alabi Olalekan, had also been arrested for concealing information from the Police.

According to him, Olalekan who was privy to information that the police was looking for the vehicle directed Adeola Omiyale to relocate it to government house, Ilorin.

“The PA is currently in Police custody and has made useful statements assisting the Police in further investigation into the case,” he said.

He said that a revolver pistol and pump action gun were recovered by the Police investigation team from Olalekan’s farm where he directed his brother to hide them.

The Spokesman said that 22 suspects involved in the bank robbery were currently in police custody.

He said that effort was being intensified to arrest other suspects still at large and all suspects involved would be arraigned in court for prosecution on completion of investigation.

He said that the Force would continue to ensure that the rule of law prevailed in every case under police investigation and offenders were brought to justice.