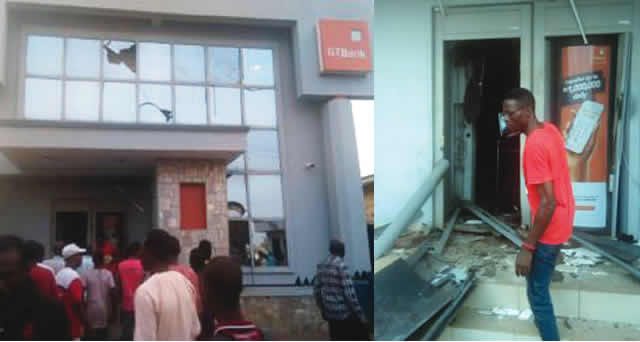 The Nigeria Police Force have arrested two out of the four gang leaders and principal suspects declared wanted on May 4 in connection with the Offa banks robbery.

The suspects are: Kunle Ogunleye, 35, aka arrow, a native of Kwara, arrested on May 20 in Oro town in kwara and Michael Adikwu, a native of Apa Local Government Area of Benue, was also arrested by the Joint Investigation Team in Kwara two weeks ago.

The Advocate reports that armed robbers attacked five commercial banks in Offa on April 5, during which 17 persons, including policemen and a pregnant woman were killed.

The Force spokesman, Jimoh Moshood, in a statement in Abuja on Monday, said the suspects who were arrested by the joint Police Investigation Team were in Police Custody.

Moshood said that the suspects have confessed to be the gang-leaders of their groups.

“The two suspects have confessed to the crime and admitted to the various criminal roles they played in the robbery. They will be charged to court on completion of investigation,“he said.

He said that Adikwu, who was a police corporal, was dismissed for criminal conspiracy and aiding the escape from custody of armed robbery suspects.

“He served three years in Prison and subsequently found his way out in 2015,“he said.

The spokesman said that the arrest of the two gang leaders had brought the number of suspects arrested so far in connection with the Offa banks robbery to 22.

He commended members of the public and other patriotic Nigerians for the timely information leading to the arrest of the 22 who are currently in police custody.

“Protection of the informant will be guaranteed by the Police and handsome rewards in addition to the pledge of N5 million by the Kwara Government await anyone whose information leads to the arrest of these wanted suspects,“he said.

The Police spokesman said the Force would leave no stone unturned in ensuring that all the perpetrators of the robbery were rounded up and prosecuted.