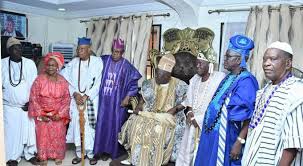 The eight High Chiefs and Baales crowned by late Governor Abiola Ajimobi in 2017 have caved in to pressures by agreeing to drop their crowns and to revert to the old system.

According to report, the epoch-making decision was taken at the meeting of the Olubadan-in-Council held at the Oja’ba palace of the Olubadan of Ibadan land, Mapo Hill, Ibadan on Thursday.

The august meeting  was also attended by coronet-wearing Baales promoted with the High Chiefs as well as some Mogajis.

On the process of nominating the next Olubadan, he said that the  kingmakers concluded on Tuesday and passed to the government, noting that this was done according to the original concept under reference, disclosing that all the kingmakers signed their respective titles as high chiefs.

He said: “We agreed with the Governor. All the processes leading to the nomination of successor to the late Olubadan were in line with the original concept of line of hierarchy in accordance with the Olubadan Chieftaincy Declaration.”

Ajibola added that commenting on the case in court “is subjudicial” noting ”it has nothing to do with the original concept of hierarchical status in the succession plan to the Olubadan throne.”

According to him,  the Governor could do his job in line with the Olubadan Chieftaincy Declaration while the case in court, which was adjourned for further hearing, is allowed to run its course.