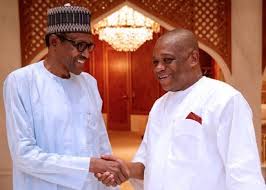 Speaking during an interview with newsmen on Arise TV, the former Governor of Abia State said states should be allowed to have their own police.

It will be recalled that , Buhari had said governors will use state police to witch-hunt and intimidate perceived critics and opponents.

Speaking about  state police under his administration, Buhari had said: “State police is not an option. Find out the relationship between local government and the governors.”

However, Kalu said: “Even when I was governor, I’ve always believed that we should have state police. I don’t have the same opinion as the president (Mr Buhari) on state police.

“I’ve always believed that if we have a bill or an act that can convince the Assembly with the constitution, why not.”