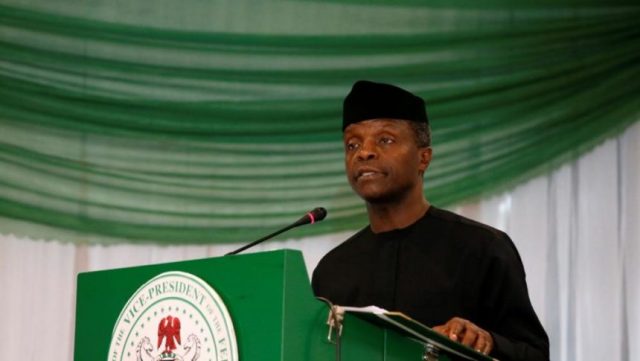 The Vice President, Yemi Osinbajo, has described the killing of two priests during a morning mass at St. Ignatius Catholic Church, Mbalom in Gwer East Local Government Area of Benue State on April 24 as satanic.

The killed priests were Felix Tyolaha and Joseph Gor, popularly called Joe Gor. Other 15 members of the church were also killed in the attack.

Osinbajo, who stated this at the burial site of the duo at the Ave Maria Prayer Pilgrimage Ground, on the Ayati hilltop in Gwer local government council.

The Vice President said the evil people behind the violence gained nothing, adding that “this evil will be defeated and ended

“On behalf of the President, government of Nigeria, the Vice President offers condolence to the bereaved and the entire people of Benue State

“What manner of man wakes up in the morning determined to kill innocent men and women? Surely such a one has lost his peace, is to be condemned and cursed, but perhaps deserves our pity even more.”

Other dignitaries with Osinbajo at the funeral are the Ministers of Transport, Rotimi Amaechi and Foreign Affairs, Geoffrey Onyeama.