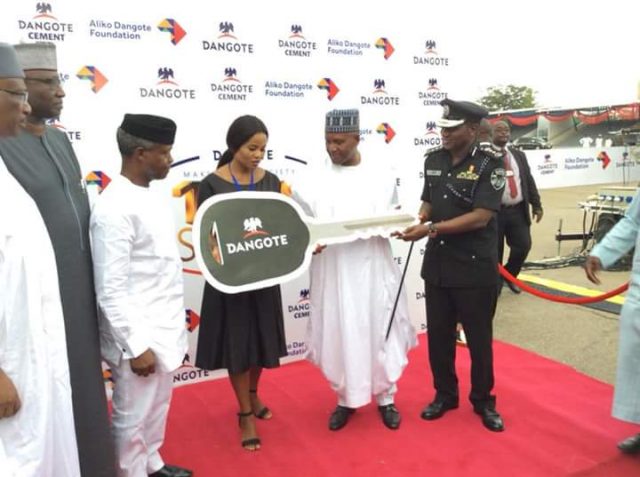 The Vice President stated that the gesture would boost security infrastructure in the country.

“I want to congratulate the Inspector General of Police on this latest donation of 150 cars.

“I think this is going to be a great boost to our efforts at keeping security all over the country.

“I would also like to call on others, especially major corporate organisations that whatever cooperation and collaboration we can get from them will be greatly appreciated.

“We wish they could follow the very great example that has been set today by Dangote Group and Aliko Dangote.”

According to the Vice President, besides the positive donation, the Government and the people of Nigeria have benefitted greatly from the corporate social responsibility of Dangote Group.

Osinbajo recalled that the group was responsible for the building of 54km Obajana-Kabba Road, several health centres in Benue, Ogun and other parts of the country, as well as schools.

He said government was aware of the micro credit scheme the foundation gave to no fewer than 40,000 citizens, noting that the patrol vehicles were directed at security of the country.

He noted that there was a lot of talk about public-private cooperation and participation but the Aliko Foundation was one that followed up with implementation.

He observed that by the group’s demonstration of goodwill to the society, it showed the group was not just interested in making profit and creating jobs, but helping humanity.

The Vice President commended the foundation for being concerned and socially-conscious, adding that
the group could have very easily chosen what else to do with its resources.

Speaking, the Chairman of Dangote Group, Aliko Dangote, said the donation to Police, being the highest from a private agency, was to support the Police.

He said the donation was important in view of the present security challenges in the country, adding that the group spent N10 billion annually in interventions in education, healthcare and other economic activities nationwide.

“We are deepening our intervention in security by donating these automatic and Nigerian-assembled cars,’’ Dangote stated as he called on other corporate groups to follow suit.

The Inspector-General of Police, Ibrahim Idris, thanked Dangote for the gesture, saying it would greatly assist the Force toward fulfilling its mandate of protecting lives and property.