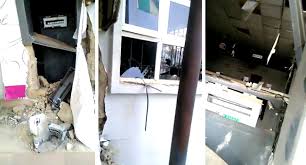 Lack of understanding on rthe strategy to be adopted by the security men to trail the armed robbers that attacked a branch of Wema Bank in Iragbiji, was said to have frustrated efforts to arrest the perpetrators, it was learnt on Wednesday.

Armed robbers numbering about 20 had on Tuesday attacked Iragbiji Divisional Police Headquarters and a branch of Wema Bank in the town. The incident led to the death of two policemen.

A top security source, who spoke to newsmen, said a combined team of police operatives, Amotekun Corps and local hunters that went on the trail of the perpetrators, forced them to disembark from their vehicles as they ran into the bush at Ada town.

“But that idea was however rejected, even though the robbers were not far off going by the sound of their gun. The security men later entered the bush but the robbers had advanced to a village called Oore where they eventually escaped,” the source said.

Speaking with newsmen, the Field Commandant, Osun Amotekun Corps, Comrade Amitolu Shittu, confirmed there was a disagreement while security men went on the trail of the robbers, saying that perpetrators, instead of moving towards Ibokun ran into bush in Ada and later escaped through Oore village.

Shittu said, “There was a disagreement on the tactics. The robbers were not expected to run into the bush where they did in Ada. From the sound of their gun, they were not far from us. One of the security men that went on the trail was shot dead. We did our best under the circumstances we found ourselves.”

The Osun Police Command spokesperson, Yemisi Opalola, in a statement made available to newsmen, said two police operatives lost their lives to the robbery incident.

The statement read in parts, “The robbers in a bid to gain entry into the bank blew off its security door with dynamite, ATM was also destroyed, but an attempt to break into the bank strong room was foiled. It is very unfortunate that in the course of the incident, and during the hot pursuit of the fleeing bandits, two police inspectors namely; Inspector Ogunbiyi Ahmed and Inspector Odeyemi Ayinla respectively, were shot dead.

“The robbers on sighting the policemen comprising of the police tactical teams with local security outfits who promptly engaged them in a fierce gun duel took to a flight and abandoned their unexploded dynamite and two of their vehicles. The Police, jointly with local security outfits have been combing the bushes in a bid to arrest the robbers, believed to have escaped with multiple injuries.”