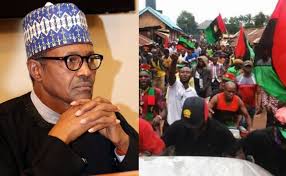 A separatist group in South East, the  Indigenous People of Biafra, IPOB, has berated President Muhammadu Buhari for linking its members to pipeline vandalism.

In a statement, the group  described Buhari’s remark linking IPOB to pipeline vandalism as totally false.

The spokesman of IPOB, Emma Powerful, said Buhari’s comment has exposed how ignorant  he is about Nigeria’s affairs.

A statement by Powerful said: “The attention of the global movement and family of the Indigenous People of Biafra (IPOB) ably led by our great and indefatigable leader, Mazi Nnamdi Kanu, has been drawn to the laughable, disgraceful and fallacious statement from the supposed President of Nigeria, Major General Muhammadu Buhari, alleging that IPOB is behind pipeline vandalism in the Niger Delta.

“For the impostor in Aso Rock to tell the US and other Western countries that IPOB is responsible for pipeline vandalism in the Niger Delta shows how shallow-minded and uninformed he is. Why should he choose to further advertise his ignorance and the failure of his Government in credible intelligence gathering by making such laughable, wide and untenable allegation?”

IPOB charged Buhari to tell the world the location of the pipelines vandalised by its members.

“Maybe the Fulani-controlled Federal Government of Buhari doesn’t know that the West is not as daft and uninformed as he and his fellow clueless kleptomaniacs are, otherwise, he would not have made such embarrassing factless claims.”