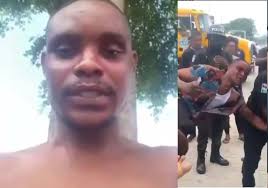 Four days after an Uber driver, Adedotun Clement, was tortured by some policemen and officials of the Lagos Neighbourhood Safety Corps, the police authorities have yet to begin disciplinary procedures against the cops.

However, the LNSC had since suspended two officers over their roles in the incident.

It will be recalled that security agents, particularly policemen and officials of the LNSC brutalised Clement, including protesters and journalists, when some youths last Wednesday flooded the Lekki tollgate to mark the one year anniversary of the #EndSARS campaign, Punch reports.

Attacks on protesters were filmed by residents and journalists, who were present at the scene.

A clip showing the beating of Clement, however, went viral.

In the clip, policemen and officials of the LNSC were seen slapping and using pepper spray on the driver, as he protested against being locked up in a Black Maria and begged to be identified.

The General Manager, LNSC, Ifalade Oyekan, who condemned the action of his officers, said they had been suspended for unruly behaviour.

He said, “The two officers and their supervisor have faced a disciplinary committee for assaulting a member of the public; their unsanctioned conduct is capable of breaching public peace contrary to the Lagos State Neighbourhood Safety Corps handbook, particularly sections (ii), (iii), (iv) and (x), which covers the conduct with the general public.

“The committee found the two officers guilty of the charge of misconduct and they were immediately suspended from the agency, while further investigations are ongoing to determine other appropriate disciplinary action against them in order to serve as a deterrent to others.”

He also apologised to the victim, saying the state government placed a high premium on its relationship with residents.

However, the state Commissioner of Police, Hakeem Odumosu, on Sunday, said the police could do nothing without an official complaint.

He said, “To the best of my knowledge, no single officer has been reported to have committed an infraction. The officers of the Neighborhood Watch were identified. I was there at the protest ground and I said if any policeman has done something contrary to our professional calling, let me know.

“There must be a complainant; we have internal trials as we don’t trail people on the pages of newspapers; somebody needs to stand and give evidence.