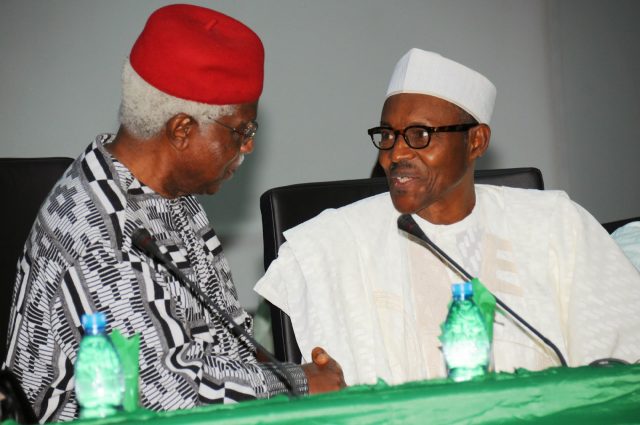 President Muhammadu Buhari is mourning the death of elder statesman and former Vice President, Alex Ekwueme who died in London on Sunday night.

The President, in a statement issued by his Special Adviser on Media and Publicity,  Femi Adesina, described the late Octogenarian as one whose regular counsels on national issues and mediations for peaceful co-existence would be sorely missed.

He condoled with Nigerians, the government and people of Anambra state, the entire Oko Kingdom, the Aguata Council of Traditional Rulers, and the Ekwueme family, over the loss of the family’s patriarch.

President Buhari said that Ekwueme’s unwavering commitment to the unity of Nigeria had been a major encouragement to many governments, recalling the personal sacrifices he made in helping to lay the foundation for sustainable democracy in Nigeria.

He also said the former Vice President worked assiduously to improve the livelihood of many poor and underprivileged people through the Alex Ekwueme Foundation, describing him as a man who served his country and humanity.

The President prayed that the Almighty God would receive the soul of the departed, and grant his family the fortitude to bear the loss.