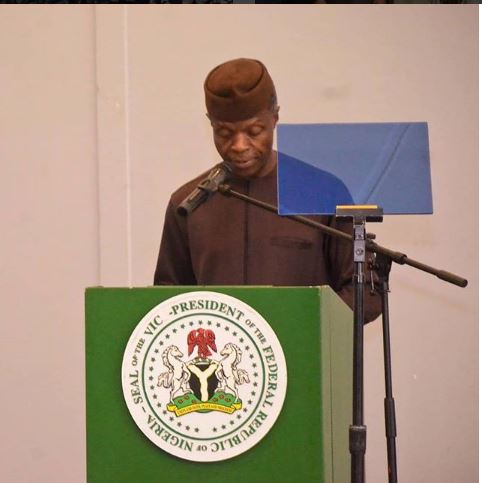 Osinbajo gave the advice in Abuja while declaring open a one-day retreat organized by the Commission, for stakeholders in the management of Nigeria’s boundaries .

“Permit me to mention that the role of the Commission given the numerous border challenges has to be more creative and innovative.

“Every nation attends to the peculiarities of its border issues with solutions that are nuanced, smart, affordable and result-oriented. We simply cannot afford to do the things that we have been doing for so many and expect different results.

“It is time to re-engineer all of our border policies.And I believe that this is the paramount responsibility of the commission and we trust that you will deliver.’’

The Vice President stated that the Federal Government recognised the responsibilities of the commission and to demonstrate it. Muhammadu Buhari, the President of Nigeria had approved the appointment of six distinguished Nigerians as its board members.

He stated that the appointment was to strengthen and reposition the commission to enable it to more effectively fulfill is responsibilities.

“It is important that you work harmoniously, not only among yourselves as a Commission, but also with all external stakeholders.

“As a Commission whose mandate includes ensuring harmonious border relations, charity has to begin at home,’’ he advised.

The Vice President recalled that by the Commission’s Establishment Act it was responsible for defining and delimiting Nigeria’s internal and external boundaries, resolving disputes, promoting trans-boundary cooperation, and coordinating all activities on our international boundaries.

“This means that the Commission has a very important role to play in mobilizing and coordinating various stakeholders, including law enforcement agencies, subnational governments, foreign governments, bilateral and multilateral organizations, and others, to collectively deal with any and all boundary issues.’’

Osinbajo praised the commission for organizing the retreat noting that the caliber and diversity of participants showed its relevance.

He expressed optimism that the outcome would redefine the narrative of border challenges in Nigeria.

“Here in this room are probably most of the best minds on border issues not just in Nigeria but anywhere.

“So we have an opportunity to move the needle on these long running issues of border management in Nigeria,’’ the Vice President stated.

He called for greater collaboration among stakeholders to fully manage the over 4,000 kilometers of external borders.

This is besides its Atlantic coastline and the thousands of kilometers of borders that the 36 States and the FCT share with one another.

“What happens along these borders greatly affect what happens within them, whether it is the smuggling or illegal oil bunkering, or the impact of undocumented migration on the security situation in the North Central, or communal clashes.