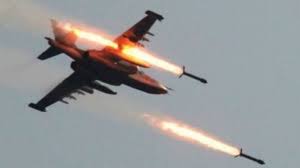 About 20 civilians have died from an alleged air strike in Dabar Masara, a border town in Monguno Local Government Area of Borno State.

It was gathered that the strike occurred on Sunday, September 26 in the afternoon when most of the villagers were out either on their farmlands or riverine areas fishing

“The civilians were either in their farms or the river bank late afternoon on Sunday when a jet flew over the general area and dropped bombardments in three different locations, all within Dabar Masara.

“In one of the locations attacked, we were told that 10 persons were evacuated and buried that same day. Maybe they mistook them for Boko Haram; but those were our relatives and they were only out looking for their daily bread because even if they stayed at home, nobody will give them foo,” Ahmadu Tijjani, a local source, stated.

It should be noted that Dabar Masara is a farming and fishing community located on the Nigerian side of the Lake Chad region in Monguno LGA.

According to Ahmadu, Boko Haram fighters had not attacked locals in a long time as the terrorists mostly storm the villages to loot food or fish without harming villagers.