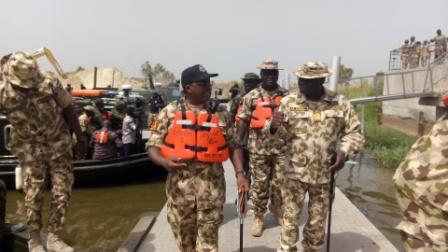 The Chief of Army Staff, Tukur Buratai has called on displaced people in Borno North to return home to restart their lives as their communities are now safe and secured.

Buratai made the call at the inauguration of nine gunboats for the Amphibious Task Force Detachment at Baga, for patrol and clearing the remaining Boko Haram terrorists from the Lake Chad waterways.

“Let me use this opportunity to call on the good people of Northern Borno to please, leverage on the deployment of operation last hold to return to their communities which have long been liberated by our gallant troops.

“All roads linking communities within these areas have been cleared of improvise explosive devices (IEDs) as well as insurgent activities as they can no longer pose any credible threats to your daily routine,’’ he said

The four-month long operation began on May 1 and was designed to flush out remnant of terrorists in Borno North and Lake Chad region as well as facilitate the return of IDPs to their communities.

Buratai said that the operation was meant to achieve three objectives.

“These are clearance operations to further decimate remnant of the Boko Haram terrorists, ensure return of IDPs to their communities and provide safe and secured environment for the resumption of farming, fishing and other economic activities in Northern Borno.’’

On gunboat and other platforms being delivered to the amphibious task force, he said that they were to enable the unit to immediately commence clearance of the Lake Chad waterways.

“The amphibious task force detachment is expected to work in conjunction with the ongoing naval operations to have a collective increased number of gunboats and capabilities.

“This is to ensure adequate patrols and force projection for clearance operations to provide security and safety for fishing as well as free use of the Lake Chad by our people,’’ he said.