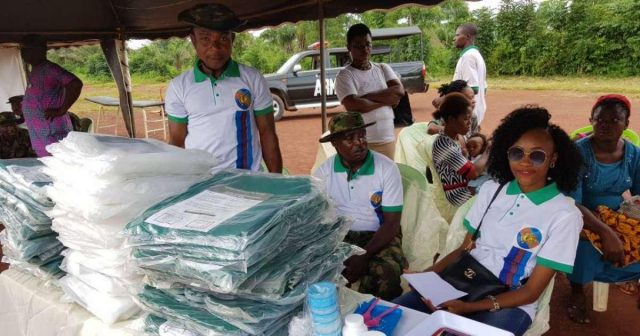 The returnee members of Katarko community in Yobe were full of excitement on Friday following the extension of a medical outreach programme of the 27 Task Force Brigade of the Nigerian Army, to their community.

Katarko town in Gujba Local Government Area, which is just 23km from Damaturu, the state capital, is one of the villages taken over by ‘Boko Haram’ elements at the peak of insurgency.

One of the beneficiaries of the outreach programme, Bukar Mustapha, 65, told NAN that the programme provided them with access to thorough medical treatment.

Bukar said the destruction of medical facilities by insurgents had denied the people qualitative healthcare service.

“The health centers destroyed are still undergoing rehabilitation and only those who could afford travel out to access medical treatment,” he said.

Maryam Kaigama, a housewife, told NAN that she suffered from malaria and difficulty in respiration for a very long time and could not afford to travel to Damaturu for medical treatment.

“The coming of the Army to give us medical treatment has changed my situation, with a new hope,” she said.

Other beneficiaries who spoke to NAN expressed same sentiment and urged the military to continue the good work.

Emmanuel Oqua, a Major, who is leader of the medical team said the outreach programme had so far been conducted in eight communities, namely Kamuya, Buratai, Buni Gari, Gashua, Azare, Buni Yadi, Gujba and Katarko.

He said the programme, which would last for two weeks, was aimed at providing medical assistance to returnee communities and other hard to reach areas which medical facilities were destroyed by insurgents.

“Malaria, typhoid, hepatitis, urinary tracts complication, upper respiratory tract and diarrhea among others are common ailments among the communities.

“The outreach provides primary healthcare to the communities, while those in need of advance treatment are referred to secondary health institutions.,” he said.