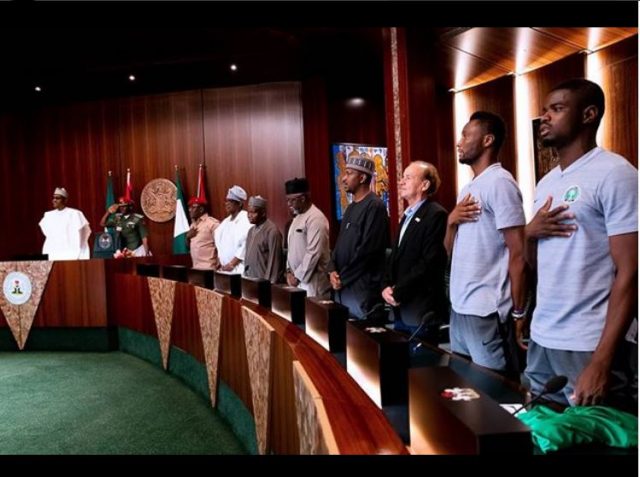 Muhammadu Buhari, the President  of Nigeria has tasked the Super Eagles to play a clean and fair game but bring the World Cup trophy back home.

The President stated this on Wednesday when he met with the Super Eagles at the Presidential Villa in Abuja, the nation’s capital.

He said that the team is very young but encourage them to display the Nigerian spirit and their knowledge to a great advantage over their opponents.

The meeting was held just before the commencement of the weekly Federal Executive Council, (FEC).

Also present at the meeting was the Youth and Sports Minister, Solomon Dalung.

The Super Eagles are expected to leave the country today for London in preparation towards their match against England at the Wembley Stadium on Saturday evening, another pre-World Cup friendly.

He asked them to always remember that they are carrying the passions, emotions, and feelings of over 180 million people.

“As you are going to represent us in Russia, you must bear in mind that you are not just going for a tournament.

“With each game, you must remember that you are carrying the passions, emotions, and feelings of over 180 million people.

“Play fair and clean, but demonstrate the gallant spirit which Nigerians are known for.

“Nothing unites Nigerians more than football and nothing will gladden the people of Nigeria than for your to acquit yourself honourably by winning in Russia.

“You are the youngest team in the tournament which means you are likely the most inexperienced team, a fact that will not be lost on your opponents. But it is also something that you can use to your advantage.

“You have the full support and the blessings of all Nigerians who will look up to you for as long as the tournament last.”

Buhari commended the Nigerian Football Federation for drawing up the right programme that is helping to refine the team to the powerful force which it’s meant to be.